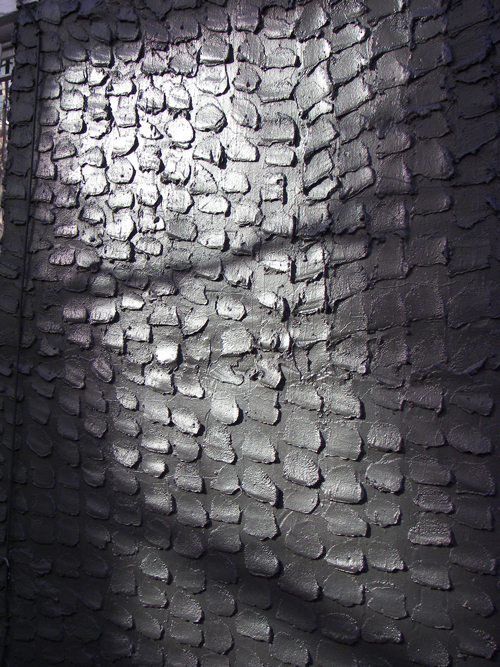 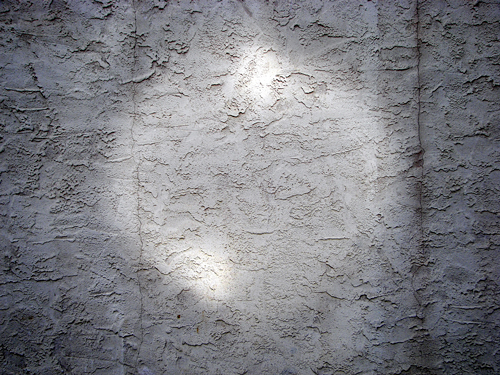 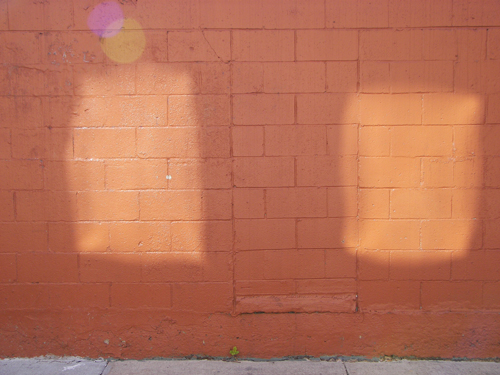 The Coffee Bar at The Radisson Warwick Hotel @ 17th & Locust Streets in Philly is spotlighting fourteen photographs from DoN‘s series titled “light beings“, February 26th through July 30th, 2010.  Strictly landscape, the images of reflections on urban surfaces seem mysterious or manipulated, the photographs evoke thoughts of what we may become – beings of light traveling at unimaginable speeds in all directions of the universe at once.

DoN was contacted by Amy Potsic of the Center for Emerging Visual Artists inquiring if he could mount a one person show with only two weeks notice?  Duh?  Amy and Ann Koivunen selected 14 images out of twenty-two, Rob Stauffer helped DoN with framing, custom mats & non-glare glass, Shoshka, Aldy & Les helped install the show – art is hard work, man!  You have to know math!?!  The Coffee Bar space is fabu, good light, great Einstein coffee, yummy food and it’s a bar at night!  How cool is that?

4th Generation, Janelle Adamska, acrylic scrim/screenprint and burn-out.  Janelle told DoN she uses a wood burning tool to burn out the negative space of the design totally time-tripping DoN back to the old Sears Dream Book with the cool wood-burning tools, remember the smell?  The artist fell in love with a borrowed tool so a friend gave her one of her own, Adamska’s scene-stealing piece sure isn’t like drawing a horse head into a piece of pine.

Text, Leslie Haas, paper.  This simple paper construct is such a great meme with little scrolls stuffed in a box like memories of futures passed crammed with lots of overlapping narratives and keepsakes.  Sweet.

Sorry, DoN doesn’t have the artist’s name for these super-kawaii postcards like old fashioned pot holders with stitched cliche’ greetings.

Pop Can Patchwork, Caroline J. Maw-Dies, pop can labels, nails, wood in traditional patchwork/quilt/basket-weave pattern, 2009.  Like tramp art of old this collage of metal embodies that home-spun crazy quilt vibe of the DIY movement, instead of bottle top ropes or toothpick clocks Pop Can Patchwork is informed by invasive advertising and cultural collapse.  Maw-Dies represents the 21st Century Gleaner, recycling and re-purposing detritus into modern beauty and contemporary design.

Saturday evening Kathryn Pannepacker, curator of the TeXt/TeXtiLe, a Philagrafika event, held a pot luck dinner and movie party @ Da Vinci Art Alliance with a great turn out of artists, good food and chummy conversation.  The homey comfortable-ness of the event, lively with old and new friends, is sure to become a tradition – it’s a great way to get people to come see an art show.  The movie was about the current DIY scene across the country featuring artists working in art & crafts and “making a living” – DoN flashed back to December’s First Friday, it was freezing and wet out and 2nd Street had maybe a hundred kids trying to sell paintings, T-shirts, hats, fudge…while the movie was fast paced, very informative and offered insight into successful models for art business’, there’s still an underlying sense of a new kind of tactic to simply survive the Great Recession by one’s own means.

Alice Meyer Wallace in the Down Stairs Members Gallery @ The Plastic Club.

Alice Meyer Wallace, Mina Smith-Segal, the photo is Bonnie Schorske‘s are featured artists in the Members Gallery; the next five member artists to show in the delightful space were drawn from a hat by a small boy with an unusually large head during the awards ceremony for the current Small Worlds exhibition.

Bonnie Schorske, photographs in the Down Stairs Members Gallery @ The Plastic Club on the Avenue of the Artists.

The Plastic Club hosts the monthly Photographic Society of Philadelphia meetings, art-aholic Salons hosted by the inimitable Anders Hanson (Jody Sweitzer announced a joint Plastic Club/Sketch Club/Avenue of the Artists show @ Off the Wall Gallery in Dirty Frank’s Bar), daily workshops and Bob Jackson makes dinner the last Friday of the month for the starving artists who gather at the club to draw and paint.  The next show is a black and white theme – interesting.

Sibylie Pfaffenbichler, Sailor on Leave, oil.  The artist explained to DoN her inspiration came from the forties and the famous images of sailors returning home.  The painting is so exuberant, vibrant and distinctive it really makes you wonder why we don’t dance in the street when our soldiers make it home.  Pfaffenbichler is chair of The Philadelphia Sketch Club‘s Annual Flower Show.

Gail Morison-Hall, The Burning Bush, mixed media & Elise Arnold, Untitled One, acrylic.  With 199 works of art, Small World @ The Plastic Club would have been even bigger if more artists understood that presentation is half the battle, the exhibitions committee refused several pieces (DoN spotted a few suspect entries who passed muster).

Nick Brown, Orange Juice Cup & Mug, stone ware.  Brown brings unfired pottery to life study workshops at The Plastic Club and sketches directly onto the clay, often you can hear him scratching grooves into the design to prevent the glaze from spreading when applied.  The resultant objects are like ancient vessels found at an acheological dig – future meets ancient.

Robert Stauffer‘s photograph, Thorazine Can Kill The Human Spirit, with broken glass in a mirror lined shadow-box frame is like a history of modern art all mushed up like DuChamp meets Warhol meets Ansel Adams.  The broken glass reads like disaster, the desert scene feels like being stranded and the infinite reflections on all sides have secret hidden images to uncover.

Bob Makoid, Avian Capers,markers.  Makoid told DoN this drawing is extra special to him because his kids surprised him by having the design made into a stained glass window.

Alan Clawans, Small Shed, photograph, DoN Brewer, light being (Farrah Fawcett), photograph (it’s not DoNArTNeWs without some DoN news), Sylvia Schreiber, White Flower, acrylic, Susan Wierzbicki, Saim, acrylic and Elise Arnold, Cats, acrylic.  DoN is so pleased to have his entries placed so strategically in the beginning, #3, and the end, #196 – the magic of 3.

Jessica Barber, Bonifacio, monotype/oil pastels @ Gallery Twenty-Two’s Making An Impression show featuring prints by Jessica Barber & Alison Altergott.  Prints is a bit of a misnomer in this show, both artists use printing as part of their process but expand the barriers into writing, drawing, collage and painting.  DoN LoVeS this print which looks very much like a Star Trek Ferengi.

DoN asked Jessica if she created this piece in Madrid because it feels so immediate and plein air, as if she set up her plates & inks right there in the cafe.  Actually the artist worked from a photo she took while on a trip to Alice’s annual painting retreat in Majorca with friends from the Plastic Club.  Jessica said club president, Bob Jackson allowed her to work late at night in the wonderful print shop “down stairs”, allowing her to create these rich, saturated images which she had framed at Liberty Art & Framing with non-glare glass.  Immediacy, tension and vitality exude from the paper with a fresh, active style only the rigorous lithograph process produces.

Jessica Barber @ the opening of her collaborative show @ Gallery Twenty-Two.  Second Friday for people in cars was frustratingly frantic, west Center City traffic was snarled because of the snow and the South Street bridge being out but DoN walked, easily strolling past cars with “Bad Romance” blasting in his iPod; Jessica was stuck on a bus trying to get to her own opening, arriving safely – fashionably late!

Alison Altergott @ Twenty-Two Gallery.  DoN asked about the girls in Alison’s prints, old dress patterns from the 50s & 20s because of the resonance of the strong feminine ideal of the home-maker.  DoN thought a feminist home-maker is a contradiction in terms but Alison defended the mystique as a commentary on what we’ve lost compared to the way families live now.  Alison Altergott combines handwriting, collage, paint and printing to develop these densely signified images about the ideals of growing up.