So, let’s talk about the big pink phallic symbol in the room. The Ice Box Gallery is so big it can overwhelm some artworks and the InLiquid Benefit Auction features hundreds of artworks by Philadelphia’s finest artists. How do you stand out in the crowd? Afghan Sentry by Melissa Maldonni Haims, an enormous soft sculpture crocheted with an unfathomable amount of pink yarn managed to photo-bomb everybody else like an art exhibitionist. The shape of the piece, the color and the, um, tassel isn’t just a dick joke, the symbolism comments on the male gaze in the art world and society’s obsession with sex and the struggles of women artists in particular.

Every element of the piece is loaded with coded information from the mathematical equations required to shape the afghan to the lurid hue of pink – just the word is a meme for modern society – to the domination of the space with the use of scale. Afghan Sentry mixes meta-magical thinking with craft, history and uncanny truth.

Read more about InLiquid at the new DoNArTNeWs

Written and photographed by DoN Brewer.

Curated by Yulia Tikhonova, Founder of Brooklyn House of Kulture
Paula Scher, Joyce Kozloff, Doug Beube, Carole P. Kunstadt, Viviane Rombaldi Seppey, Karin Schaefer, Dahlia Elsayed, Alastair Noble, Aga Ousseinov, Paul Fabozzi, Amy Pryor, Irina Danilova, Robert Walden, Ariane Littman, Jeff Woodbury, Brooklyn Art Library, Hand Map Drawn Association
MAPnificent! Artists Use Maps brings together a group of artists who creatively employ the philosophy and technique of mapping to convey information ranging from sociological data to aesthetic stimuli. The exhibit features paintings, works on paper and sculpture that reflect the artists concerns for the current state of our society, conveyed though charts and diagrams, and their admiration of the map as a symbol of longing and the unknown. The works included either illustrate a scientific research in demographics, or a flow of capital, or distribution of patterns, but also present the artists reverence for maps. For some of the exhibiting artists, mapping is a tool to create interactive visuals with the help of sophisticated tools for image manipulation that arrange numbers into intricate geometrical forms. Maps are primarily received as directional; a subway or bus map is understood as a tool to get somewhere. In fact, the title of this exhibition borrows from a google-map application, MAPNIFICENT, which calculates the time between places via public transportation. For the artists, however, a map is often an end in itself: a work of art, filled with revelation and delight. Press Release
February 1March 31
FIRST FRIDAY reception, March 1, 69pm
AIGA Philadelphia SPACE, 72 N. 2nd St., Philadelphia, PA 19106
Artwork Image Site
Facebook event page
City Paper’s First Friday Focus
With Art Philadelphia/Uwishunu 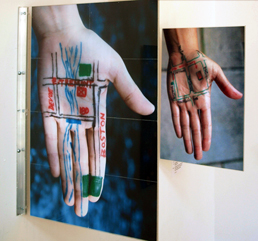 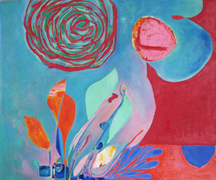 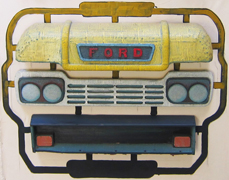 Due to many requests, this email blast will be open for event submissions this Spring. Stay tuned for more info! Keep posted on Facebook! To unsubscribe from this email list, please reply with “unsubscribe” in the subject line.

MacAllister chronicles a spectacle in viewpoints: whether as the cineaste documenting surveillance in an artist’s garden in her short film, “Fighting the Creep” or time lapses in fiber art in the music video “Girl Gangs” projected in the gallery on a vintage 1930s pop up screen.  Her figure painting reveals the abnormalities in gender and in form, rendered in encaustic, collage, oil stick, and oil paint she hand mixes from pigment.  Sixteen new photographic pieces dye printed on aluminum at 10″ x 10″ hint at holographic Holga effects with subjects including botanical, Aztec dance, and other worldly scenes captured in camera. Since 2012, MacAllister has been creating body sized pillows featuring her photographic imagery. Expect to see the same motifs on hard and soft surfaces in an ambitious installation, the largest collection of these pillows to date.  MacAllister has taken her imagery to a new medium: fiber.  She is digitally embroidering her images captured in Ethiopia, at the Coney Island Mermaid Parade, in the rural South, in Los Angeles, and in Philadelphia onto beautiful silk from saris.  The result? Something quite spectacular.

MacAllisters work has been exhibited nationally and internationally since 1999. She has previously exhibited at the Delaware Art Museum, Galeria  in Mexico, the Utopia Library in Italy, Boricua College, University of Pennsylvania, Finlandia University, the Philadelphia Free Library, the Plastic Club, International House Philly, and the Center for Green Urbanism in DC.  Her films have been screened in Norway, NY, LA, and UK.  MacAllister is a 2009 Fulbright-Hays awardee to Ethiopia and a 2007 Pushcart Prize nominee.  She has performed at the New York Foundation for the Arts (NYFA) and the Cat Cat Club in Paris.  She is a member of NextFab Studios, where she has created much of the work for this exhibition. For her full accomplishments, visit bonniemacallister.com. For her blog, visit bonnie-macallister.blogspot.com.

During the run of the show, iMPeRFeCT Gallery will feature musical, performance, and film events, including a performance event (featuring bands live scoring films) on Saturday, April 13 curated by MacAllister and her multimedia label Certain Circuits.  The last Saturday, April 27 will mark the gallery’s traditional “Last Supper” fundraiser during which MacAllister will give a talk during an intimate supper in the exhibition. The gallery even offers the surprise of the “Red Room,” where a guest artist will devise an installation in a non-traditional space.

The iMPeRFeCT Gallery is a not-for-profit alternative art space dedicated to the voice of the artist. We are an international, community based exhibition space in Germantown, Philadelphia, where we’ll celebrate the work that comes out of passion.  Founded by Renny Molenaar and Rocio Cabello, the iMPeRFeCT Gallery was created with the intention and hope of becoming a voice in our community and in the ongoing conversation with the art world. Our approach to this work is that of facilitator, where artists of very different persuassions can present themselves and their work with as much freedom as possible.  Our programing will include monthly exhibitions, performances and other events; it is also our intention to bring art out of the gallery, with the creation of works in public places, the publishing of limited edition prints and an active presence on the Internet.  We as artists strongly believe in the transformative powers that the arts bring to our lives, we want to share that experience and inspire action and change.  For the full event schedule during the month of April, visit www.imperfectgallery.com.