Mr. Naar was present at the opening reception, signing his books The Birth of Graffiti (2007) and Getting the Picture (2005).  DoN purchased Birth of Graffiti and chatted with Naar about how to present photographs most effectively.  “Naar’s photographs have been published in many of the world’s leading magazines and exhibited at the Metropolitan  Museum, the Museum of Modern Art, the International Center of Photography, New York, the Museum of Fine Arts Houston, and the Centre Pompidou, Paris. In 2005-06 at the Jan Cunen Museum in the Netherlands, his retrospective attracted a record-breaking 15,000 visitors (Jon Naar’s website).” 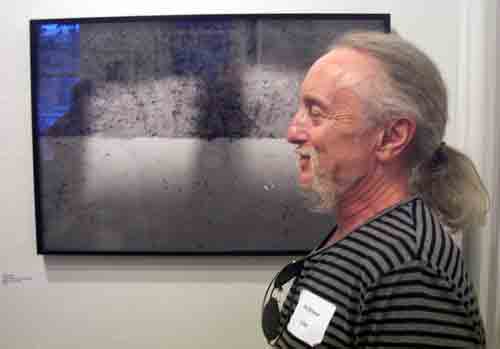 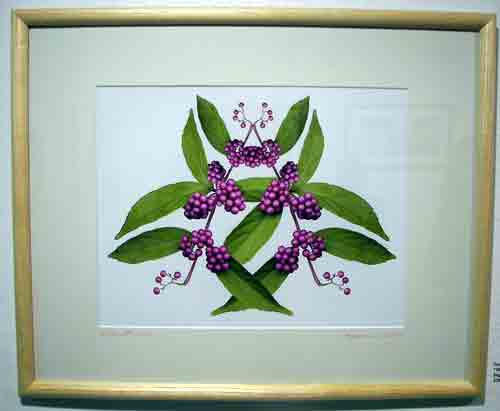 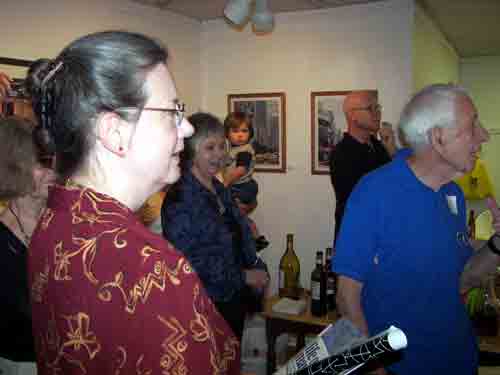 Suzanne Comer with Photo Synthesis juror Jon Naar.  Comer was trained as a painter who used photography for reference but is now a primarily a photographer which explains her painterly eye.   Comer was thrilled to win an award with such terrific competition at The DaVinci Art Alliance, she positively glowed with pride. 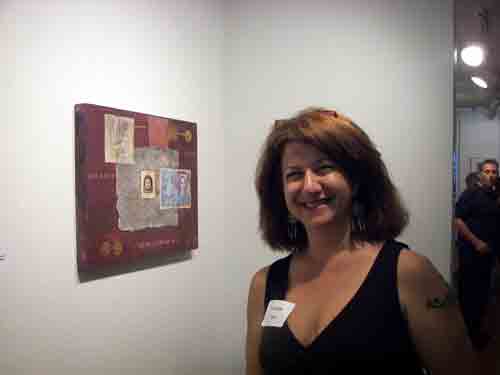 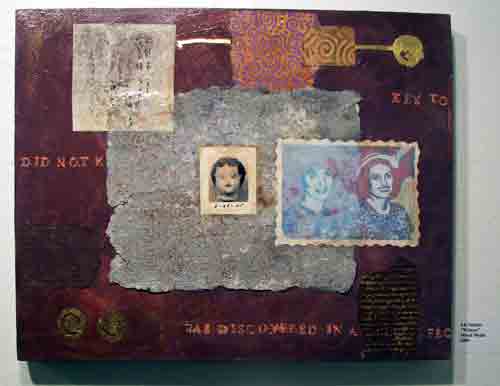 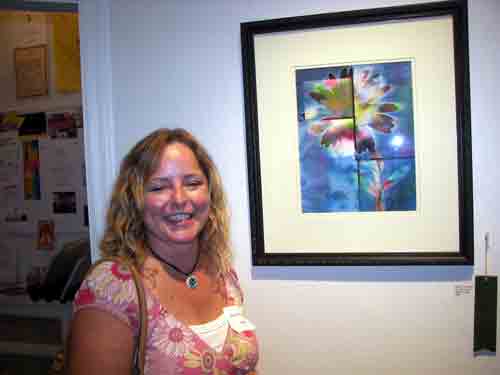 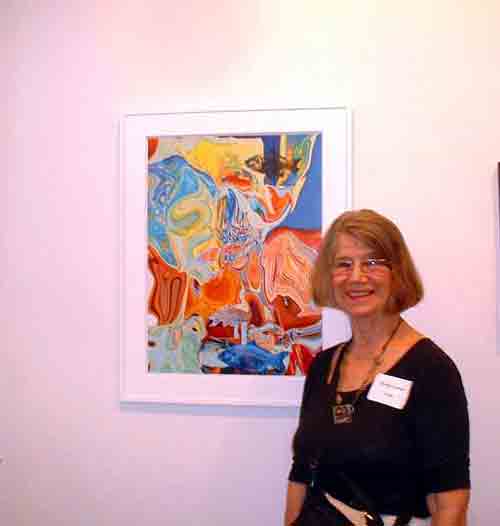 Miller’s T-Shirt was created by Margharita Warhola, niece of Andy Warhol, exclusively for Deb.  Andy would have been 80 years old this year and has been gone from our plane of existence for twenty years now – hard to believe.  Dr. Deb explained the meaning of photography in her opening remarks, “Phos is Greek for “light,” and graphein is Greek for “to write”–so photography means writing with light.”

All photography by DoNBrewerMultimedia except where noted.

Philadelphia Area New Media Association presented a primer on new web applications which was totally fascinating, fast-paced and intelligently presented, including talks by Kelani Nicholeof M, Johnnie Billota of Indy Hall and Nick Floro of Sealworks Interactive Studios.  DoN learned so much cool stuff about the web, social networking, design and working with clients – PANMA is a wonderful resource for artists, designers, coders, videographers, photographers – if you are one of the afore mentioned you should join PANMA, it’s free, fun and informative.  The presentation took place in the Buckminster Fuller room with a portrait of Bucky that seems to stare at you wherever you are in the room as well as his Dymaxion map of the world – very cool.  Do you know what “FOAF” or “OWL” means?  DoN does now.

Some of the cool websites we looked at include:

The Center for Emerging Visual Arts keeps raising the bar on curating art shows in Philadelphia, the current exhibit, Décor/Decorum, of photography, sculpted plates and plaster vignettes is simply exquisite like being plunked down into a scene on a Wedgewood plate only it’s in your eccentric grandmother’s white lacquered cabinet.  Photos of the interior of Joelle Jenson‘s grandmother’s Florida home are a temporal distortion, the mostly white spaces combine a mix of natural and artificial light, memory and architecture, austere, fresh and clean – when fresh and clean didn’t mean you were hip-hop but a time when everything had a place and was in it, sparkly and shiny.  Joelle’s grandmother had glamour shots of herself stratigically displayed thoughout her immaculate home, even producing calendars with her beautiful image, her snow white hair perfectly coiffed, as gifts for family members. Now Grandma is a star in Joelle’s homage to an esthetic quickly disappearing from the American landscape; Joelle confided with DoN that the family used to ridicule their grandmother’s decorating style but when she died and Joelle’s parents moved in they didn’t change a thing.  Jenson has completed photographing her husband’s parents home in Florida and is working on a series from her other grandmother’s abode.  Jenson produces her work at The Camera Club  of New York and exhibits at Wall Space Gallery in Seattle. 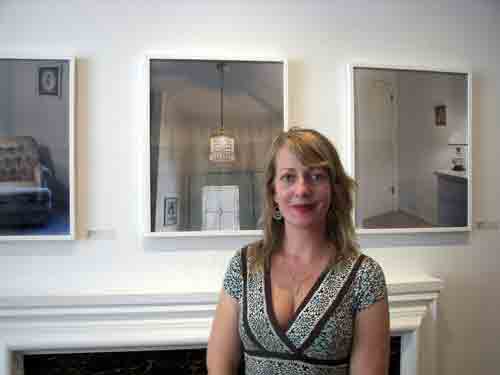 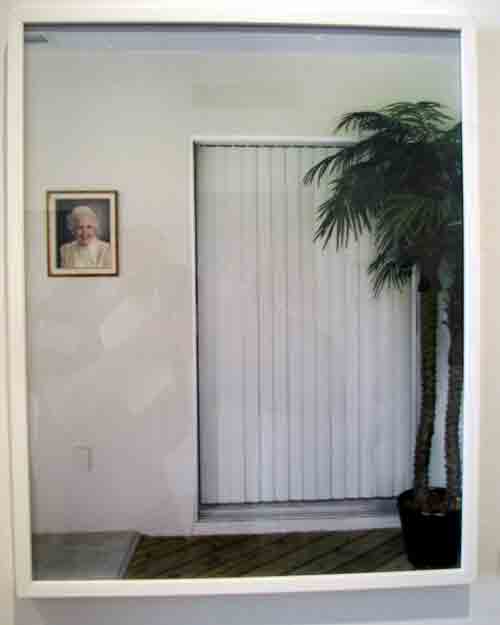 Jedediah Morfit’s carved plaster plates and vignette’s mounted on the wall compose a chilly counterpoint to Jenson’s photographs.  Morfit “explores irresistible contemporary taboos including craft, religion and narrative” (CFEVA art card).  The antechamber gallery features a wall of plates Jed told DoN was about “new temptations of Saint Anthony“, with the plates each featuring a modern tempting diversion.  The opposite wall has a striking series of bas-relief sculptures with antebellum women pushing wheelbarrows filled with bones and heads running from a rain of arrows – very powerful.  DoN overheard one patron say she felt she was in, “one of those blue plates”.  DoN suspects she meant Wedgewood china.  Morfit tells DoN these are the first in a series that will feature “tons of figures including flying monkeys”. 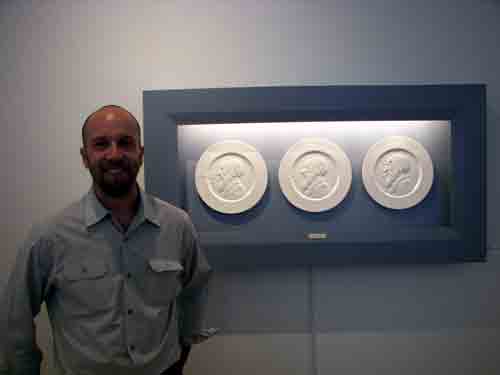 Jedediah Morfit with his plaster plates in CFEVA’s main gallery.