Monday’s at World Cafe Live on Walnut Street is open mic night (no cover charge), art friend Henry Martin was on the bill so Shoshka and DoNarrived early to find a comfortable table with the intention of video taping Henry’s performance. The show is emceed by Boy Wonder with acts ranging from singer/songwriters to rap/hip-hop to jazz groups, folk-rockers and rock bands – the featured group was Philly’s own HEAD who totally rocked the house with a five song set. DoN videotaped two songs and hopes to get permission to share the LoVe because HEAD’s lead singerLexi Greene is HOT and sing’s like an illegal clone of Grace Slick and Alanis Morissette, backed up by keyboardist/singer Tori Ryzner, drummer Ryan Jarrell, Mark Greene on bass and Michael Zimney on guitar the tight rocking songs left DoN’s ears ringing and the crowd cheering. Boy Wonder keeps the show rolling with early acts getting to do three songs, then the HEADliner gets five, then more groups get to do three songs, then back to singers/songwriters who get to perform two, the last few performers get to sing one song. DoN will have some clips of Henry and some of the other performers ready soon.

DoN and Sho felt bad for the two guys who had to follow all the rock bands but they totally took on the challenge with an acoustic guitar and an accordian!?! Ironically, DoN bumped into Patrick Welsh in Rittenhouse Square and found out his group is called The Writers Club and the accordian player hangs out in the Beauty Shop Cafe (DoN knew he looked familiar). DoN congratulated both guys for the gumption to get up and sing while the buzzed crowd talked over their set of Americana/Ghettotech/Folk songs. Hey, this what they call,”paying dues.” Another standout performer was Elle, a sultry, sophisticated Philly girl singer who has a new album coming out – Elle totally dominated the room with her soulful pop songs.

DoN‘s gonna have to get a MySpace page so he can “friend” all this great talent but there was a joke in The New Yorker a while back – “What’s worse than your Dad having a MySpace page? Your Dad’s band having a MySpace page!” Since DoN isn’t a dad or have a band but is a great-uncle of adorable Jaelynn he’s been reticent, but watch for DoN on MySpace soon.

Tuesday evening Sho and DoN joined friends Dody and Len to visit the Bristol Riverside Theater for a workshop performance by Bristol Junior High School students who are working with the theater company to eventually produce a hip-hop version of Shakespeare’s 12th Night!!! Coached and encouraged by performance artist Will Power, a group of about a dozen teens wrote and performed a moving piece touching on the subjects of racism, gossip and small town life – one beautifully talented young singer performed an original composition acapella, she had informed Will that she could sing a Mariah or Alicia Keys cover but ended up writing an original song with his encouragement. A star is born. Upcoming artist’s who will help the kids understand the show next February include choreographer Donald Byrd (The Color Purple), Teo Castellanos, Fred Curchakand Spectrum Dance Company. DoN thinks it’s cool that BRT is picking up where the school is leaving off in helping young people experience the excitement of the performing arts. The Q&A demonstrated how putting on a show raises self esteem, breaks down social barriers and teaches kids to study. 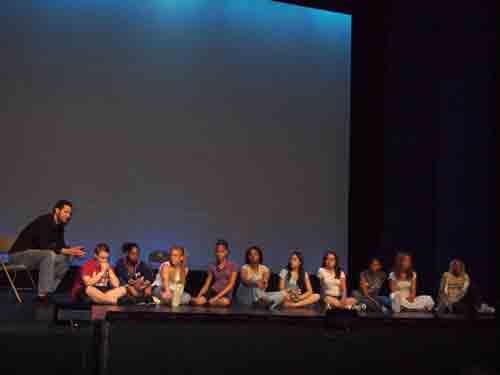 Thursday evening was the opening of Enter Digital at at the Off the Wall Gallery @ Dirty Frank’s Bar, 13th and Pine Streets. Curated by Jody Sweitzer, the wall at Dirty Frank’s has become a coveted spot for emerging and established Philadelphia artists developing the raucous historic space as an art destination frequented by local artists from the neighborhood, the Plastic Club and the Philadelphia Sketch Club. Juried by Allan Stegeman of Drexel University and Marlise M. Tkaczuk of Moore College of Art and Design, Enter Digital displays cutting edge digital 2D art with work by 25 area artists including Anders Hansen, Rick Wright, Damon Hollis, Clark DeLeon, JJ Tiziou, DoN and more. 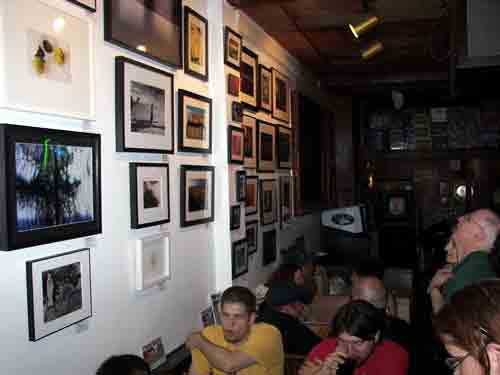 Anders Hansen is represented by a splashy, colorful abstract which started as a watercolor painting digitally photographed then posterized in Photoshop, demonstrating that digital art isn’t just photography. But the show is dominated by photos some taken with camera phones!?! A new genre perhaps? 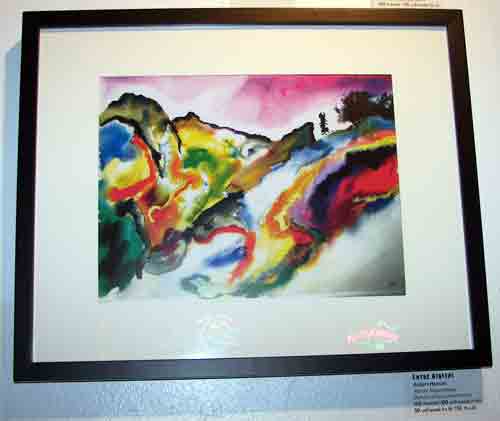 Rick Wright‘s entries are camera phone pictures, Giclée printed on Hahnemuhle rag paper – small in scale but strong in subject, Wright is avant garde with his use of common place technology. Trained as a painter at Princeton, Wright earned an MFA from Columbia for painting but started photography after working with the Aron Siskind Foundation in Chicago. Wright lectures locally about photography and has had his Principia Insectica photos displayed at The Center for Emerging Visual Artists and other prominent venues. Check out his website for some cool imagery. 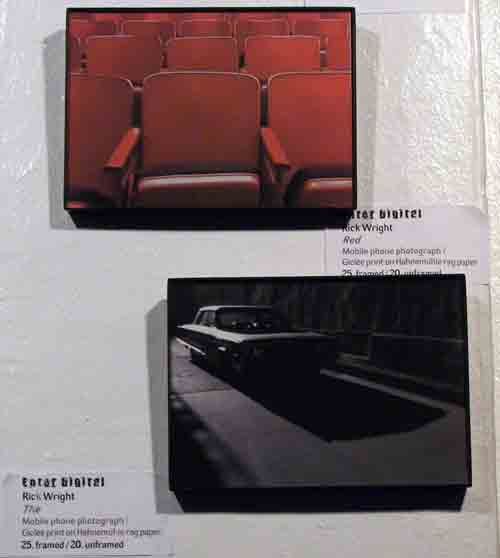 Jacques-Jean Tiziou entry is a photo from “How Philly Moves“, check out the blog and how JJ is working throughout the community producing dance exhibitions to raise funds for Septa Art in Transit along with friend of DoN, James Peniston. Tiziou says,”Digital has freed me from the dark room and toxic chemicals, but has enslaved me to the computer.”

The Enter Digital show is on display through August 1st; DoN will post more about the art and artists @ Off the Wall in future DoNArTNeWs.

75th Rittenhouse Square Art Festival on the Square and Holy Trinity Church DoN told you about the extraordinary venue at Holy Trinity before so here are a couple photos0: 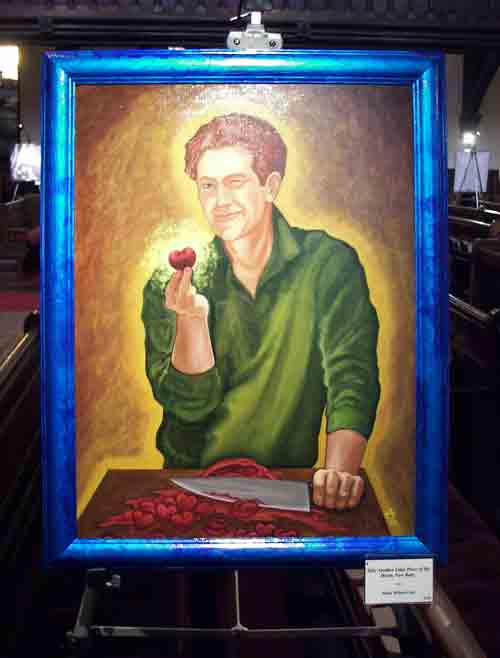 Alden Cole‘s “Take Another Piece of My Heart, Now Baby“. 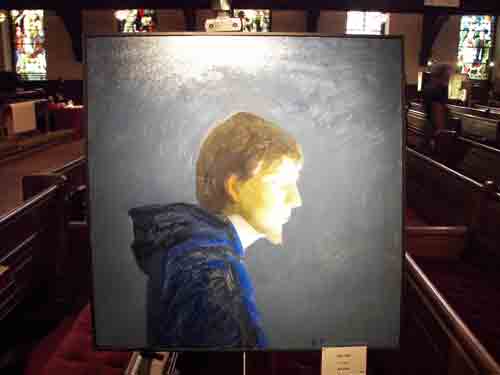 Chiarra Lattazio‘s, 4th of July, a thickly layered and glazed panel of wood with a splintered corner is spectacular, Bonnie Schorske‘s photo of a little lamb and a child peeking out of the window is precious and Mina Smith-Segal’s plein air Church of the Holy Trinity is brash, naive and a bit brutal all in a good way – a real stand out in the crowd of 50 images.

This year was the 75th Anniversary of the Rittenhouse Square Arts Festival with hundreds of artists set up in tents around the perimeter of the park. DoN was impressed with the adventurous quality of the art – not so many sofa paintings of over-scaled pears and more investment quality paintings, etchings and sculpture. Speaking of investment quality – artist Charles Cushing, who has participated in the festival for almost 20 years, displayed an enormous canvas with a heroic theme – The 7 Cities of Gold. The painting portrays conquistadors on the precipice of a cliff who have been seeking the fabled lost cities of gold which they can see in the distance which turn out to be shiny mud huts but in Cushing’s version of history the Spaniards find a huge billboard of an extinct beer brand from the 1950s, worn out and tired after transmitting it’s message across the barren landscape, yet they still are awed by it’s power; Cushing titled the painting, “The Seven Cities of Goldmund.” Charles has recently moved his studio to the equally fabled 915 Spring Garden Studios – DoN expects even more outrageous and exciting paintings from the brush of Charles Cushing. 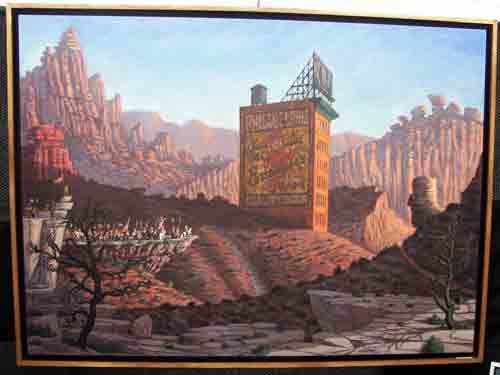 The 7 Cities of Goldmund by Charles Cushing @ Rittenhouse Square.

Newman Gallery is hosting the PSC Member’s show on the mezzanine and third floor of their historic gallery on Walnut Street. The show is displayed absolutely beautifully; the staff at Newman’s placed each painting, photo and print with care and precision so that each piece harmonizes with adjacent works. DoN feels like his painting is hanging in a museum!!! Much appreciation to Terry Newman for sharing the space with the club, please visit asap – you will definitely be impressed. 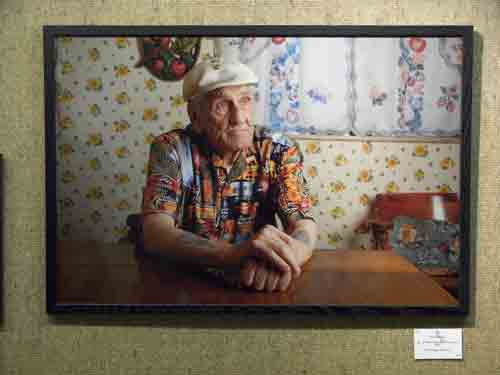 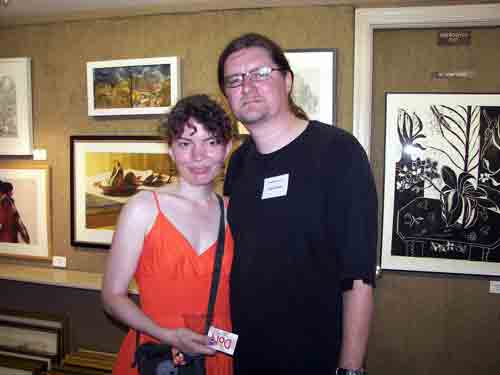 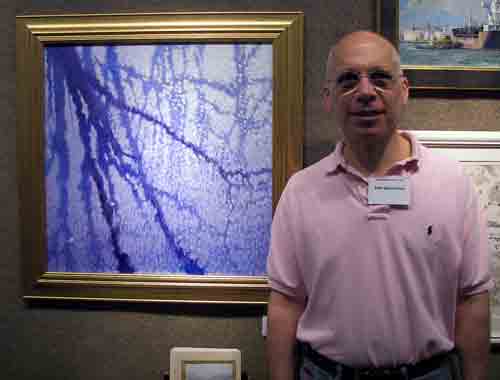 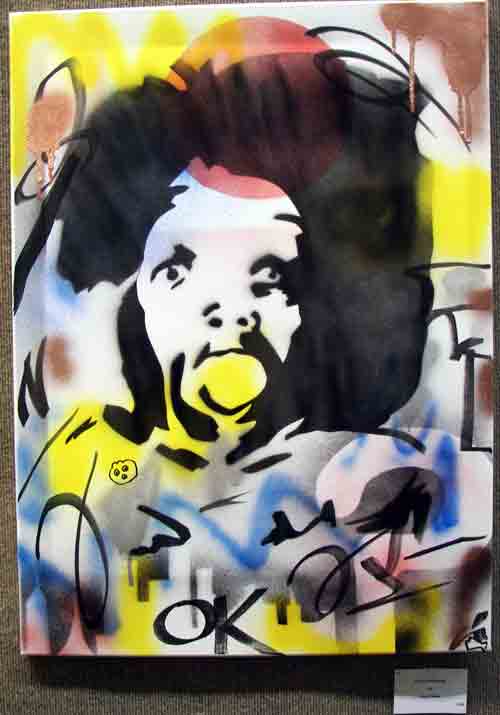 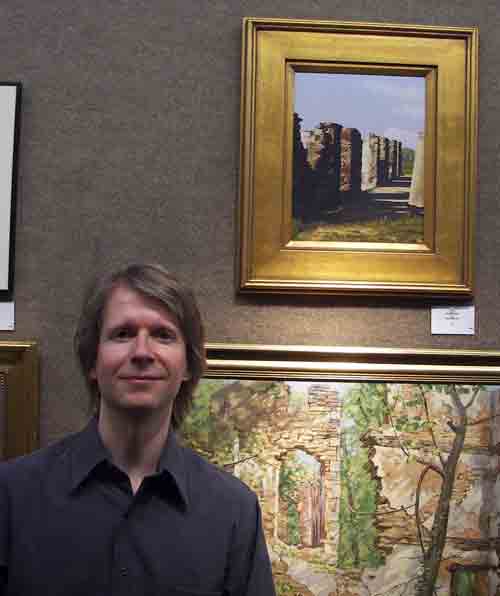 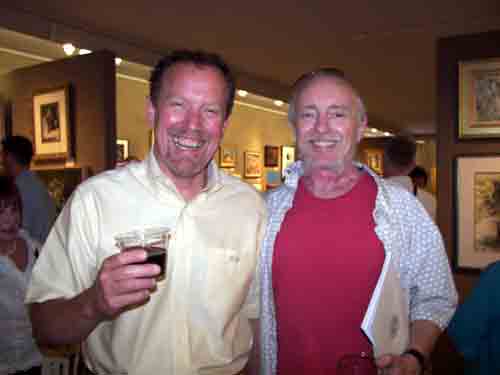 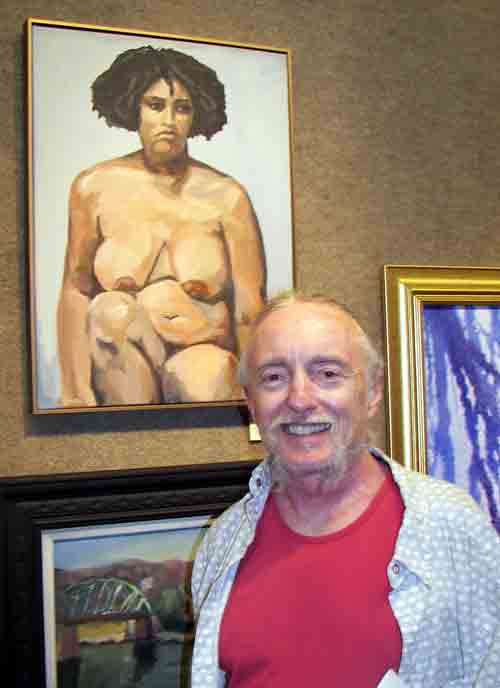 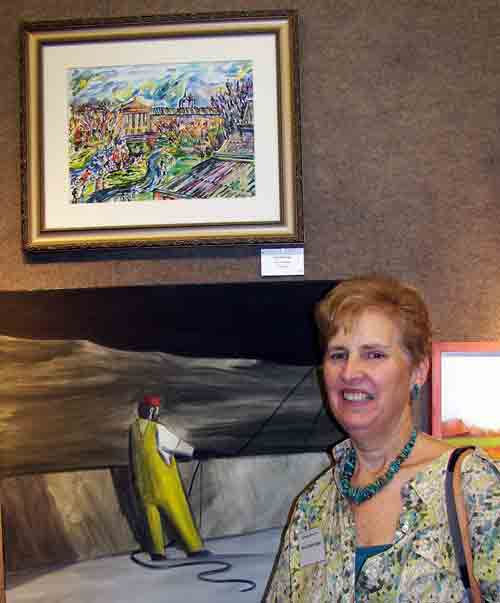 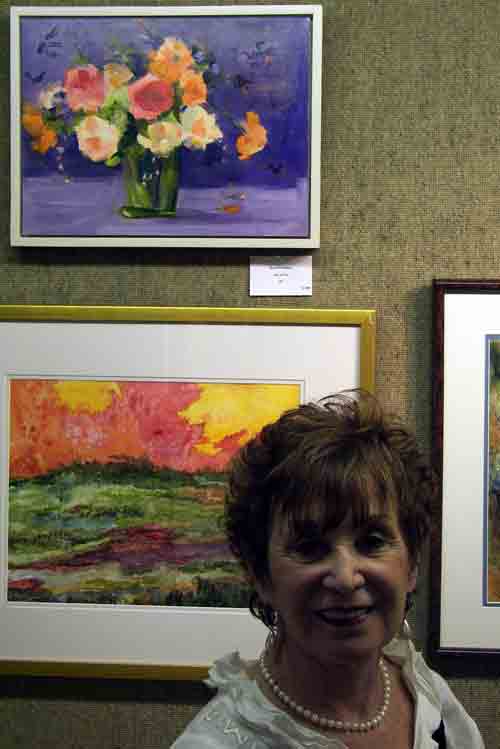 After partying at Newman’s, Shoshana, Alden and DoN attended the opening of Envisioning Othello featuring innovative and exciting works by members of the Davinci Art Alliance inspired by the Lantern Theater Company’s recent production. Since DoN attended public school he doesn’t know much about Shakespeare but the artwork helps explain the story especially Liliana Didovic’s lovely portrayals of Venice, Alden Cole‘s extraordinary images of Othello’s transformation and Liz Niklus‘s mixed media depiction of Desdemona. People, this is a great show – go see it and then have dinner at Sabrina’s. 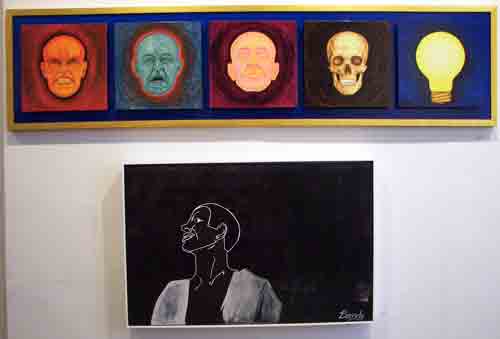 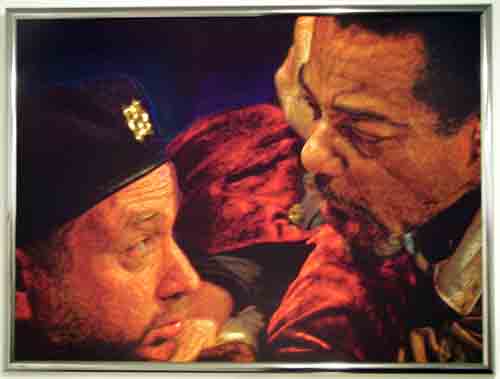 Digital photo giclee print by Rikard Larma from a scene in the production of Othello by the Lantern Theater Company. Larma is originally from Sarajevo and is photo editor for Metro. 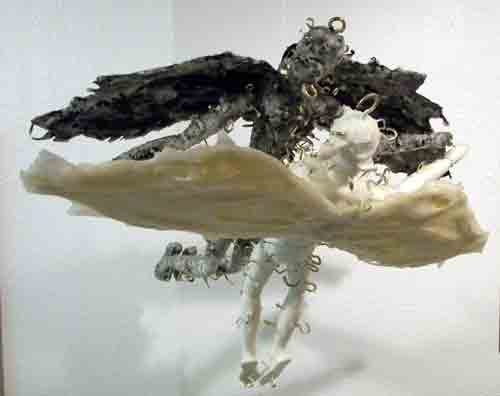 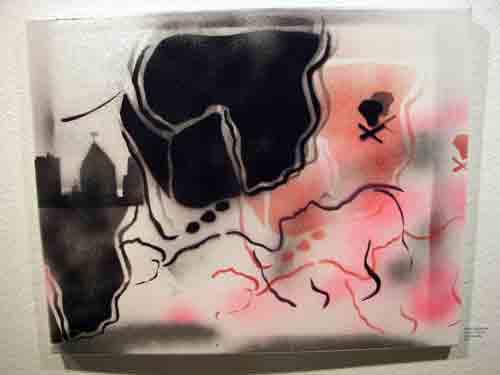 Sunday, DoN refreshed the “light beings” photographs displayed at The Beauty Shop Cafe, 20th & Fitzwater Streets, with new framed pieces and unframed signed work, this is the last week for the show. Please stop in and support Jon’s cafe, his business has literally transformed the fabric of the neighborhood and DoN appreciates the exposure he has so kindly offered for his art.

All photos by DoNBrewerMultimedia Photography except where noted.