DoN slowed down this past week and focussed on his own art work and missed a lot of the shows – you know how it is.  Tuesday at the Philadelphia Sketch Club DoN worked with charcoal and chalk to produce one of his best drawings to date.  Saturday, DoN turned in his entry for the Poets and Painters Show at the Philadelphia Sketch Club, a painting based on a song lyric by artist Henry Martin, which opens Sunday 6/22, 1-4PM.  Sunday afternoon, DoN painted in the garden at the Plastic Club with Bob Jackson, Kim, Lynn and about ten others – the subject?  Five lovely models posing in the nude under a tent in the summer sun.  DoN painted on a round canvas he’s carried around for years and listened to Ligetti on his iPod; a beautiful energizing afternoon.

Back to DoNArTNeWs – Friday evening Shoska and DoN attended the opening of David Foss‘ Thought Forms exhibit at Ken Tutjamnong’s Smile Gallery at 105 South 22nd Street near Chestnut.  In a creative burst of energy Foss has changed direction in his art to more texture and form with diagramatic/pictographic ellipses, ovals and squiggles on both large and small surfaces of canvas or wood even sculptural wall hangings of vortex forms, symbols and signs. David and DoN discussed the Theosophist bent of the new works and indeed Foss’ artist statement immediately refers to mark-marking, symbolism and sacred geometry.  Many of Foss’ pieces verged on reiki symbolism – cool. 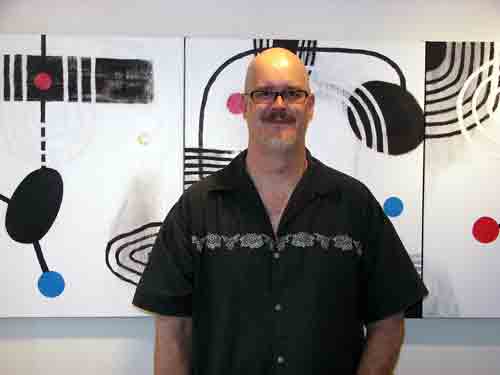 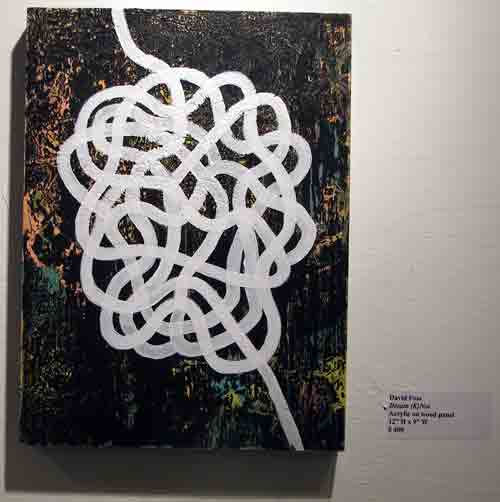 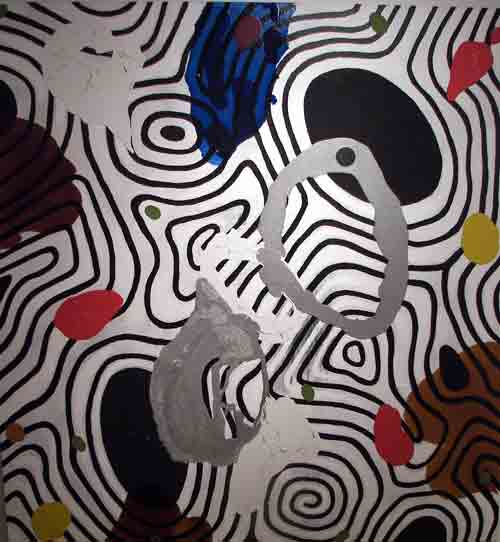 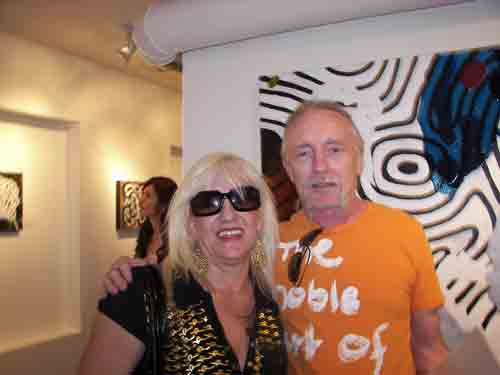 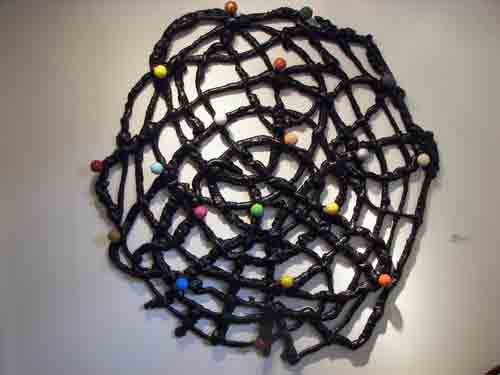 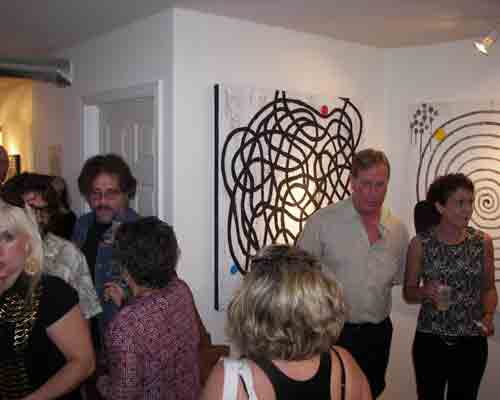 David Foss is the director of the Davinci Art Alliance and many of the members turned out for the opening party including Lilliana Didovic, Kathryn Pannepacker, Katerina Stojkovic, Karen McDonnell and more.  DoN discussed Stojkovic’s work in the current Envisioning Othello show and how she tries to make the viewer part of the art – she focussed on the strawberry patterned handkerchief with it’s meme of texture, taste and seasonality.  Karen McDonnell explained how she collaborates with Anthony Cortosi in their art – by using “low” art forms like stencil cutting and spray paint, the pair elevate the materials to “high” art with a focus on handwork, individuality and craftsmanship.  Their system is working because they took a prize in last yearsPhiladelphia Sketch Club’s Works on Paper show and currently are exhibiting at Lapelle Gallery in Old City.  By mixing and matching stencils the duo create myriad combinations of enigmatic shapes – McDowell sent DoN a picture of their new sticker from her phone.  Pannepacker is currently in a two person show with Michelle Marcuse at Bitar in West Philly but it closes Thursday – so hurry up and go see the encaustics. 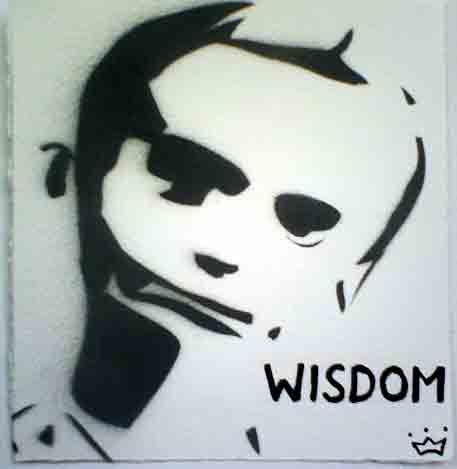 Kathryn Pannepacker told DoN how much she enjoys DoNArTNeWs, so he explained to her that it started as an exercise called “artist dates” out of the book The Artist’s Way by Julia Cameron and she said that she participates in a group that goes on artist dates as well.  Once a month Kathryn and friends meet for dinner and talk artsy stuff and once a month they all go to see an exhibit.  It’s that easy to get inspired, meet new people and have some fun out of the studio.  It’s so cool that the artistic spirit is so prevalent in Philly whether it’s through formal education, alliances, clubs or people just getting together and keeping art alive.  Sho and DoN talked with Debra Scott of the Enclaves gallery about the upcoming Susan Abrams show and blogging.  DoN also met Roman Iello who creates a vlog (video blog) called ROMANBLOG with videos about the Philly art scene- very cool.

Saturday night DoN had planned to go to the West End Gallery in Media to see the exhibit by Karl Olsen and Anders Hanson but learned the same night was the opening for the Workshop Show at the Plastic Club, which includes three of DoN‘s drawings, as well as three superb pieces by friend Alden Cole.  So, DoN is an art mercenary – but will make an effort to go see the West End show.  I’m not kidding, the works in this show are outstanding and almost everything are pieces created on the premises during workshops.  DoN talked at length with Mina Smith-Segal about her exuberant painting style,Sandy Schwartz about various types of charcoal papers and David Young about the arts club he belongs to in Mt. Airy (btw Young’s drawing in the studio is superb).  The Guinn‘s are excellent hosts, Mike’s drawings are excellent and the ever present Bob Jackson displayed three books of drawings done with ball point pen – talk about mixing high and low, each drawing is $25. cash and carry, it just doesn’t get any better. 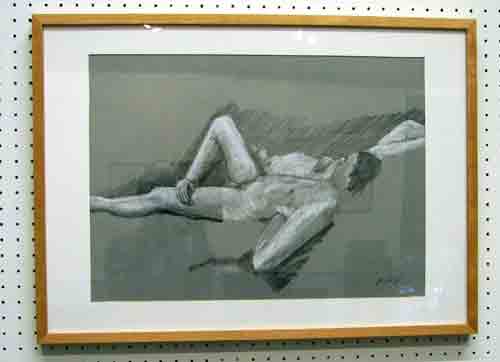 Drawing by DoNBrewer @ The Plastic Club. 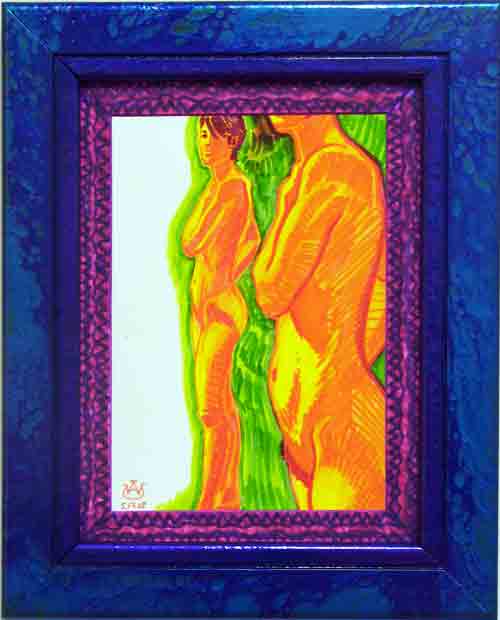 PS – DoN‘s “light beings” show is up through the end of the week at The Beauty Shop Cafe at 20th & Fitzwater.