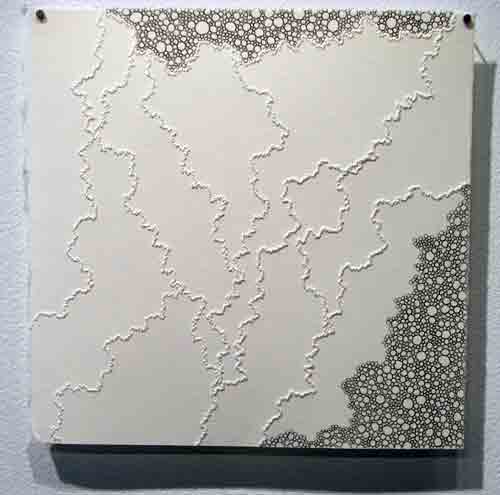 The Triangle Space’s Delaware U MFA Show was a hoot with political diatribes, sci-fi landscapes, crisp drawings and brutalist paintings – pretty thrilling stuff for a group of young, soon-to-be grads entering the real art world.  UD students participating in the MFA Thesis Exhibition are David Carlisle (wacked out sci-fi fantasy installation – a DoN fave), Rodney Godek, Michael Kalmbach (cool political portraits with dotty abstract overlays), Teresa Mikulan (intaglio “I Wish I had Some” and diaries are a DoN fave) , Lauren Scott (atmospheric painterly scenes of dysfunctionality), Jennifer Peel (lovely crisp pencil work) and Lauren Vanni; an announcement was made that UD will have a permanent space at Crane as their off-campus gallery – DoN is impressed that UD finds Fishtown so attractive as an adjunct art space. 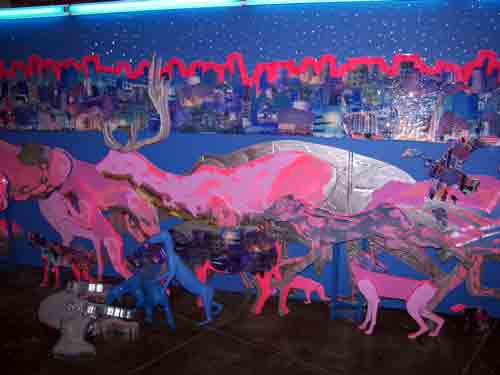 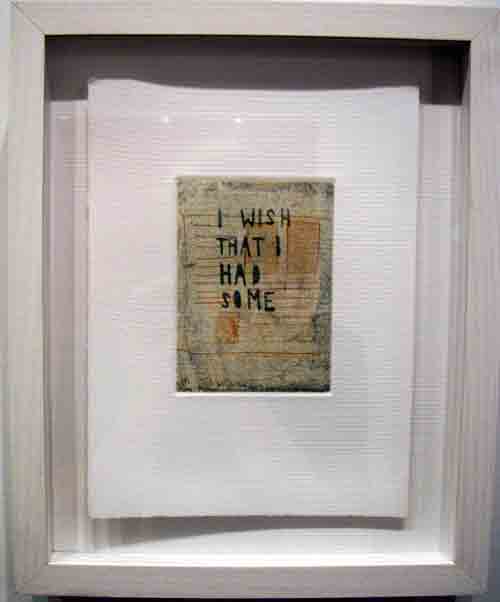 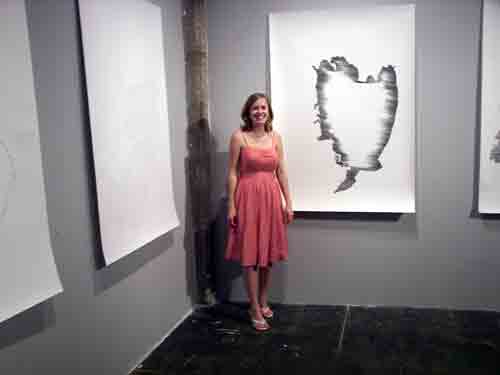 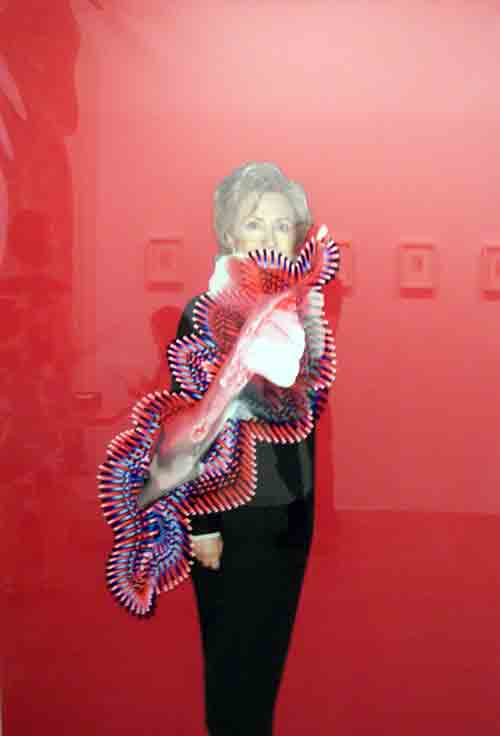 Speaking of Fishtown, Jessica Demcsak ‘s installation of wooden boxes and wood on the walls reflects the unique landscape of the area around the Crane building and nearby Kensington; the Hall always seems to have something special with the high ceilings and wide display area. DoN found the “don’t get too close lines” made of masking tape around the stacked boxes amusing since anybody could accidently kick one anyway – maybe a velvet rope would be more appropriate? 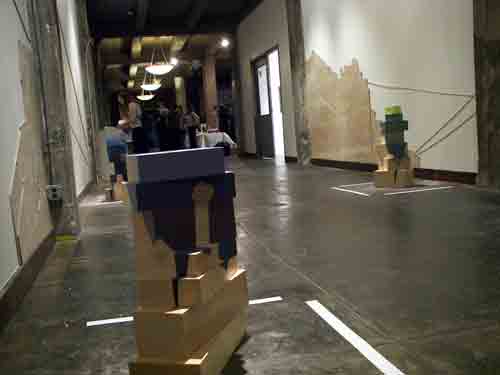 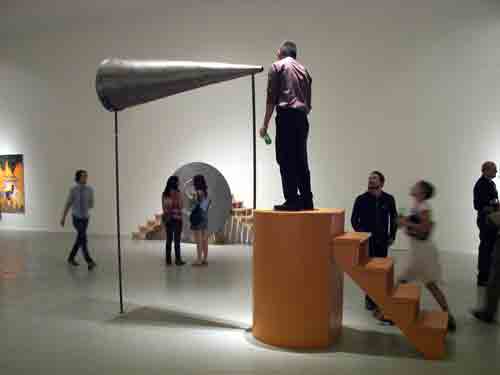 But, DoN‘s most favorite of all the openings is the exquisite paintings by Sean O’Neil: Collect. Consume. Rebuild, at Kelly & Weber – these paintings have legs, masterfully executed, simply framed and rife with gestural semiotic symbols like handshakes, shoulder shrugs, hugging, and bowing painted in an almost super flat style with words, dots and stripes interspersed with figure studies.  More about O’Neil later, too. 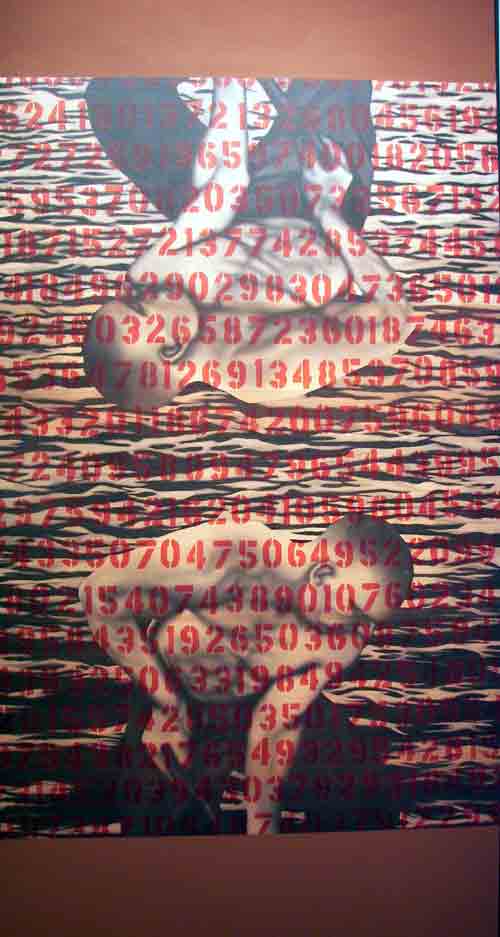 Friday night was a big night for DoN, even though he was preparing for his own show at the Beauty Shop Cafe, the 25th Anniversary Party for CFEVA at Photo West Gallery was too cool to miss.  On the first floor is photography including a group of light boxes by Lindsay Sparagana with images of the abandoned Pennhurst State School, established in the late 1800’s as a school for the “feeble-minded”, the place turned out to be a horror house of abuse that wasn’t shuttered until 1987!  Powerful stuff!  Lindsay and DoN estimate 1987 is about the same time lots of “feeble minded people” started camping out on the streets of Philly – have you heard about all the homeless people on Moravian Street?  A group of Donald Camp‘s large photo portraits dominate but don’t overwhelm the space (one is on the cover of the current Art Matters). 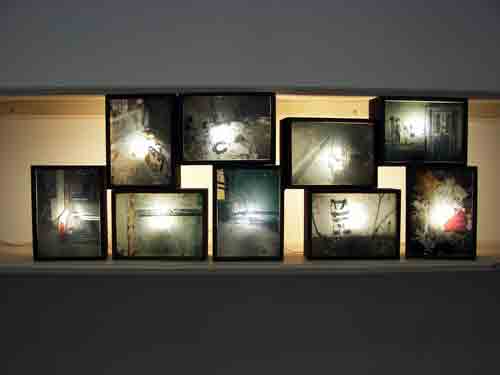 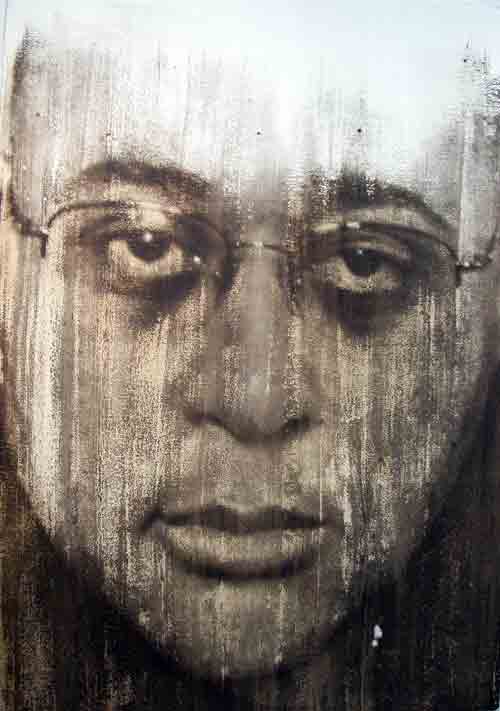 On the second floor DoN immediately ran into the groovy Brooke Hine with her spiny anemone/sea urchin ceramic installation. Brooke and  DoN reminisced over when he interviewed her while she second-naturedly rolled clay coils in her studio and talked at the same time.  Brooke mentioned she had to hire help to complete the project but not everyone is skilled at coiling clay (probably one of the first things kids do when they start to work with clay). The resulting wall installation is classic Hine – fragile, scary, nature forms with luminous texture and sheen – originally created for the Liao Collection on Race Street, Brooke worked on the sculptures 12 hours a day for a month. 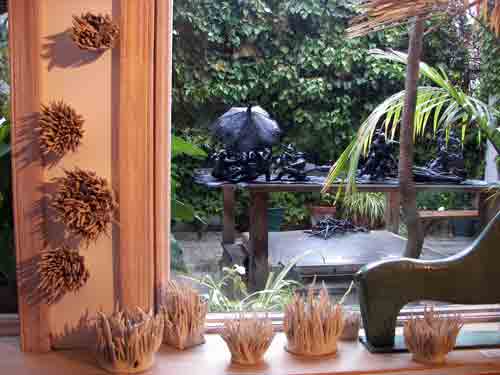 Nearby is a large group of interesting mixed media pieces by the aforementioned Rebecca Gilbert – one piece called She Cried, I had Nightmares are fish-like constuctions made of collograph prints on stuffed muslin.  Another mixed media piece is a merry-go-round of teeny tables and chairs printed on little flags; Rebecca explained the symbolism of musical chairs-like behavior romantic relationships can create.  DoN totally relates. 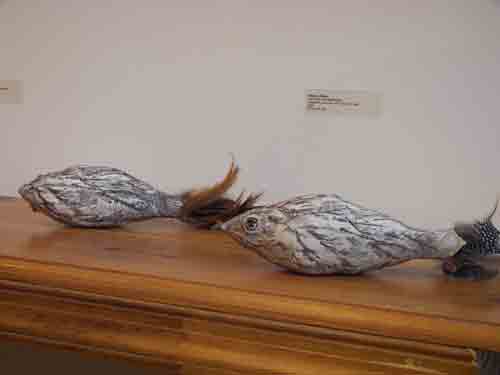 She Cried, I had Nightmares by Rebecca Gilbert @ Photo West Gallery. 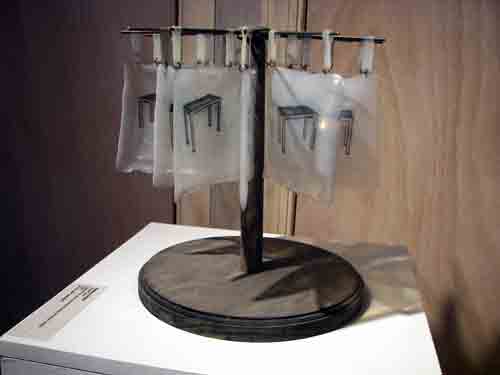 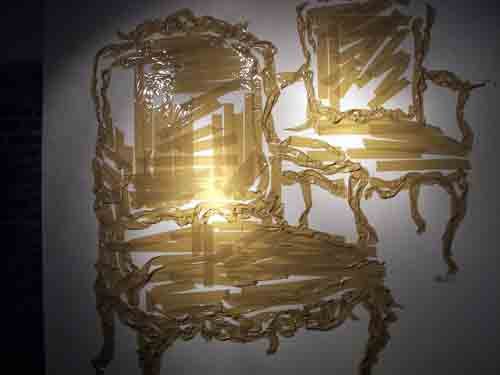 In the kitchen is a group of small paintings by Anne Canfield based on family photos from her father’s side of the family from whom she was estranged after a divorce.  Anne created a way to fill in the blanks of the lost history of her family (she’s happily in contact with all her relatives now).  On the third floor DoN met artists Marisha Simons and Kara Rennert; Marisha creates ethereal printed silks with images of nature signifying innocence, growth, blooming and the theater of the outdoors and Kara is an art history expert who has become a wonderful sculptress. Both artists recently participated in the Pittsburgh Center for the Arts Biennial – I know, Pittsburgh has a Biennial and Philly doesn’t!?!  They are also Fellows of the Career Development Program @ CFEVA.  DoN bumped into artist James Peniston who talked about his new project HowPhillyMoves ,check it out, it’s all about dancing, volunteering and bringing art to the SEPTA Art in Transit project – DoNhopes they win and you can help.  James also brought up Philly’s Pissed – check it out. 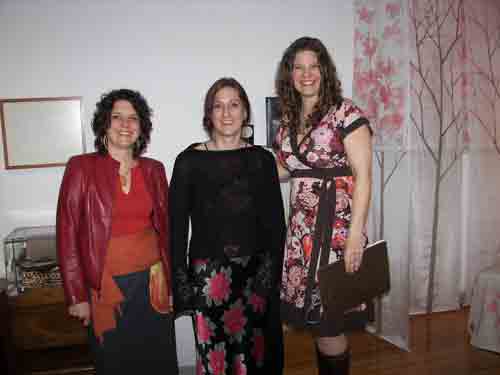 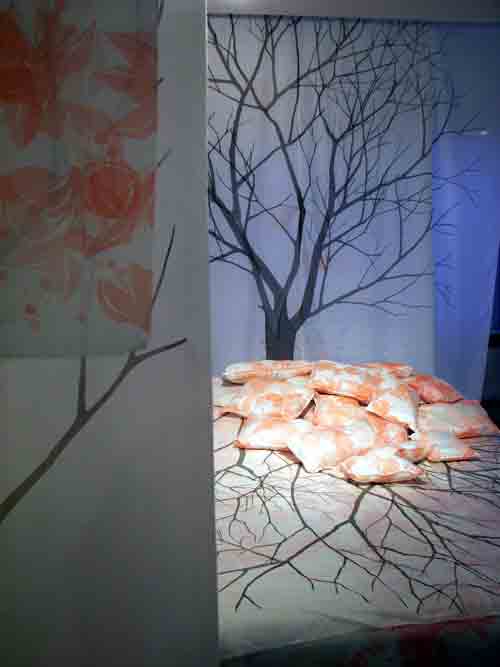 Andrew Pirie asked me to remind you that CFEVA is selling  super-cool T-Shirts with images by Matt Neff Designs for $30.  There are many more artists represented at Photo West but DoN moved on to the Philadelphia Sketch Club to check out the new solo exhibit by B.A. Keoghcalled Bounderies Broken featuring large scale pigment prints on acetate, fabrics and paper, as well as his own work in he PSC Workshop show in which he has three pieces. 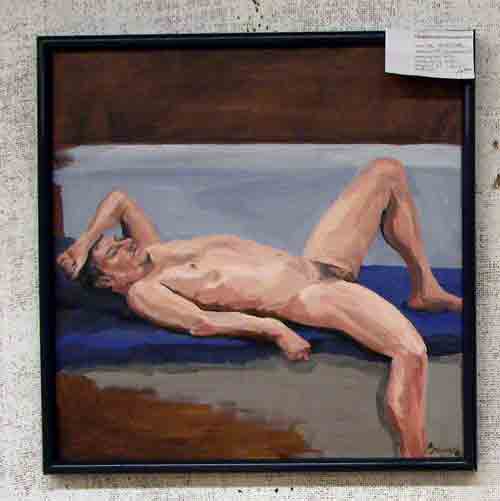 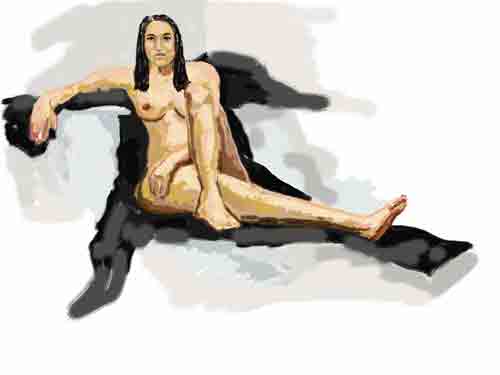 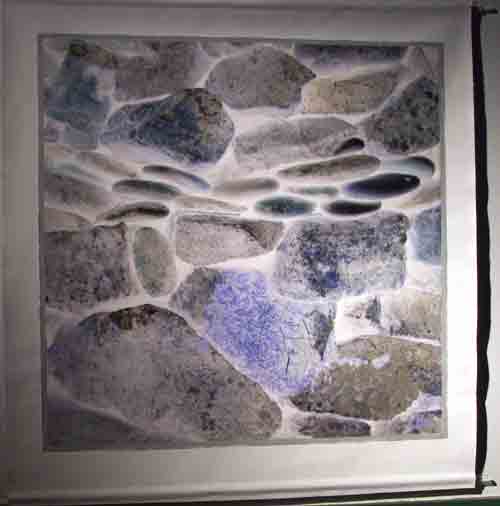 After chatting briefly with with Don Myers, Bill Paterson, Steve O and prospective member portrait painter Garth Herrick, DoN zipped over to the 10th Street Laundromat for the monthly art party featuring art by Bill Kelly, Josh, Lillie Ruth Bussey who also performed and music byDJ Uncle Crazy.  Yeah, it’s a real laundromat but the art is for real, too.  Kelly’s photos were about conservation and preservation, Josh’s drawings and paintings were trippy and brightly colored and Lillie displayed a clothesline filled with (thrift shop?) shirts emblazoned with her logo.  Good food, cold beer, hip-hop and R&B, piercings, earrings and tatoos – DoN fit right in but had been trooping around for hours so headed home to finish prepping for his own show at The Beauty Shop Cafe. 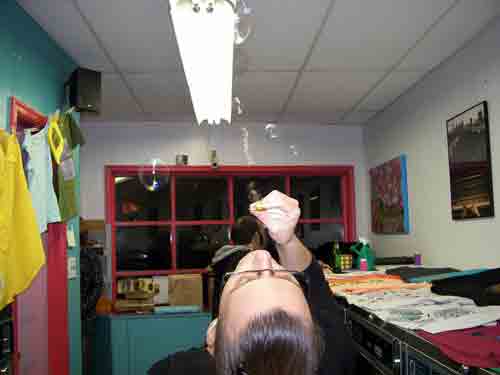 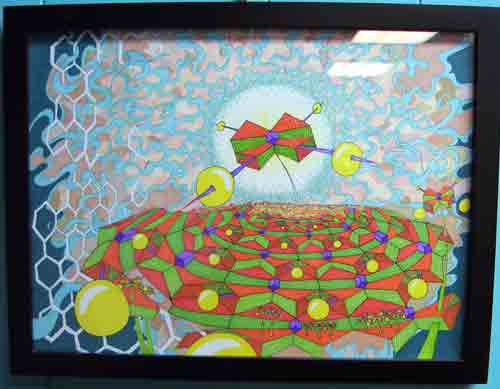 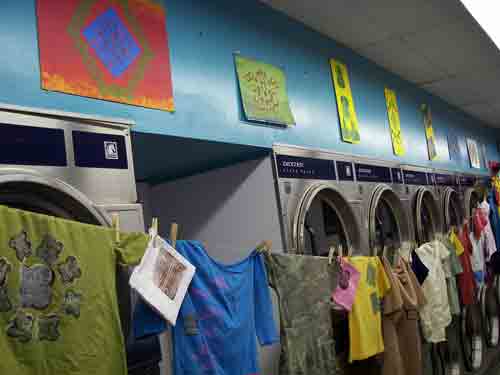 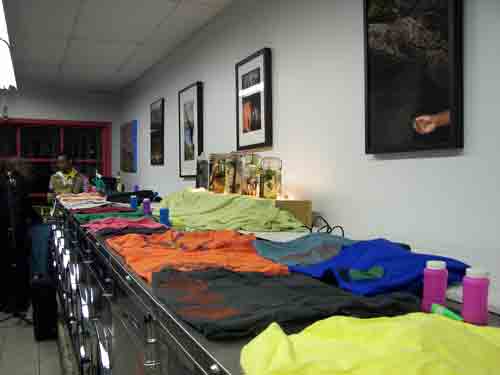 DoNBrewer has a one-person show of fine art photography at the Beauty Shop Cafe, 2001 Fitzwater Street featuring 17 images from his “light being” series through 6/14.  Owner Jon provided snacks and wine, folk rocker Henry Martin performed original music and many friends and neighbors came out to celebrate the opening including artists and enthusiasts, Ivin Williams, Charles Cushing, Jed Williams,Alden Cole and Shoshana Aron.  DoN is grateful to everyone for participating and supporting his artistic endevours.  If you missed the party, let’s get together and have coffee. 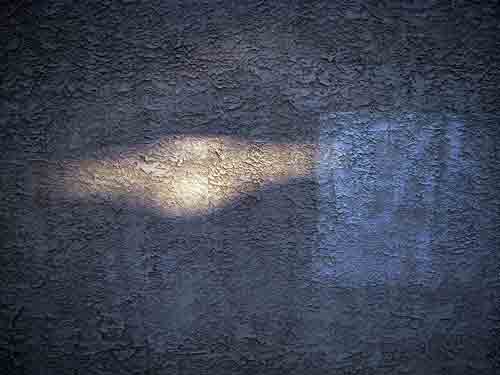 light being (Rick Selvin) by DoN @ The Beauty Shop Cafe. 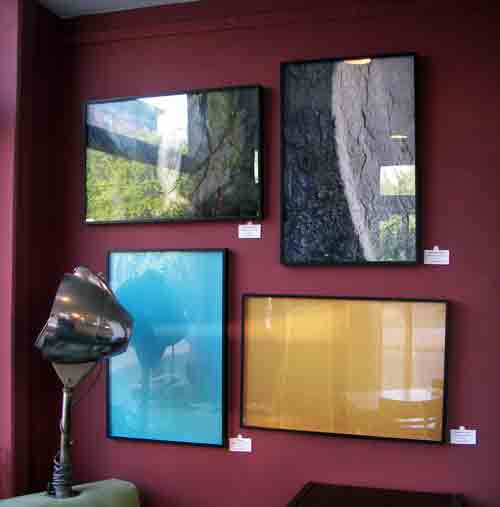 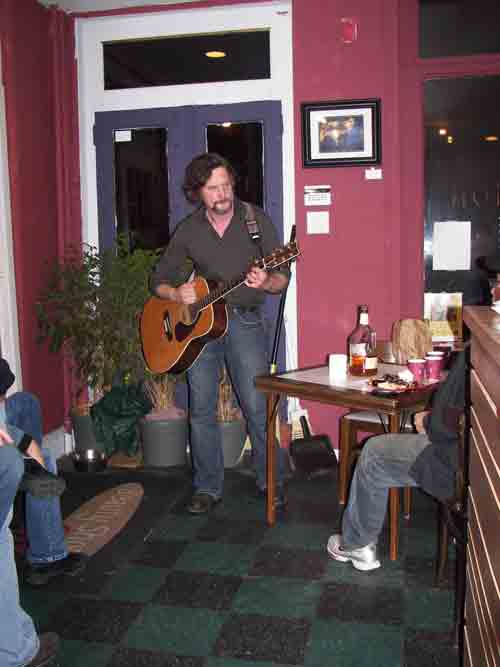 Finally, DoN wishes to acknowledge the passing of friend, Larry Angel also known as GadFly.  Larry was a Viet Nam vet, a farmer in the Pine Barrens and most recently a political blogger (read the last post on his blog) who rankled local politicos by exposing corruption, waste and general stupidity by government lackeys.  Larry was not well liked by the police since he felt that the duplication of services by all the small South Jersey towns was wasteful; once he was jailed for 10 days because his goat was on the loose, another time he was questioned by the Secret Service for quoting Frank Zappa on his blog, “The only dope that should be shot is the president.”  When Governor Corzine was in a coma after his famous accident, Larry filed a law suit because it was caused by the State Troopers driving too fast and he didn’t think the taxpayers should pay for his medical services.  DoN has adopted, Doofie, Larry’s enormous Saint Bernard mix – she wouldn’t get out of the car for the police but came right to DoN and Katie the ArT DoG, and is now a city dog who loves cookies, long walks and the dog park.  Larry’s motto was “Believe those who are seeking the truth.  Doubt those who find it.” Andre Gide, French critic, essayist & novelist (1869-1951).  Larry, DoN will always LoVe you. 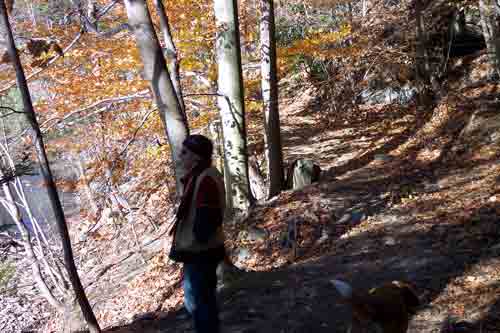 Larry Angel & Doofie on the trail.

All photos by DoNBrewerMultimedia Photography