“Diane Litten is playfully exploring unconventional fashion: no patterns, no sewing, just fabrics. All shapes, sizes, misshapes, holes, intentional and not, textures and colors. These fabrics were formerly used to create spaces and dress windows, and she is excited to be bringing them back to life, ‘dancing’.  While working with them, a jingle organically came about that she will be singing in the background from time to time. She calls the line and the jingle ‘No Sew Fabulous‘.”  – Diane Litten

“Diane Litten is able to successfully bring together chaotic beauty with structured form, creating pieces that make a statement…  Her ability to create whimsy while helping the wearer make a definitive statement is nothing short of genius.” – Philadelphia Art Alliance 2011

GROUP MOTION Performance Project… is an extension of the Group Motion Friday night workshop that has been running in Philly for over forty years, guiding participants into a space of authenticity, communication and play, and into personal and collective journeys. PP has been ongoing for thirteen years, and is offered twice each year to engage and celebrate a focused experience of dance/movement and music as a form of ritual and community. With a different theme for each Performance Project, we engage in a process of collaborative creation and play to investigate themes based on PERSONAL stories, ENVIRONMENTAL concerns, BODY IMAGE, or DREAMS, and aim to create a sacred space where landscapes and archetypal images can emerge.

Exhibition includes art, images, artifacts, and stories from the The Clothesline Muse PHILADELPHIA, PA—The Painted Bride Art Centers Gallery is the setting for an exhibition of more than 100 works that explore historical and contemporary visual artists’ relationship to the Clothesline. On view March 7 – April 12, 2014, Clothesline Musings | Art Inspired by The Clothesline includes artists Allan Freelon (1895-1960), Earl Horter (1881-1940), Beverly McIver, Howardena Pindell, and Maya Freelon Asante, as well as artwork selected from a national call for artists. 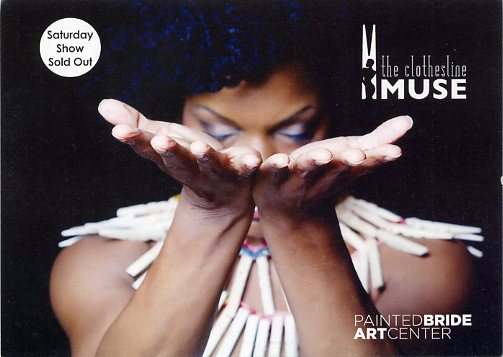 This multimedia, interactive exhibition is inspired by the grind and grace of domestic life. A diverse range of visual media is presented: fine art, photography, prints, sculptures, installations and digital art created by artists’ interpretations– literal, figurative, and abstract– of the clothesline, hand washing and line drying, clothesline games and memories, and the environmental impact of taking in the wash. Clothesline Musings | Art inspired by the Clothesline will run in tandem with thepremiere of The Clothesline Muse, a multi-disciplinary theatrical production that explores the clothesline as a metaphor of our community lifeline and its ties to our environment. The exhibition will also take a closer look at the set and stories behind The Clothesline Muse– showcasing archival images, artifacts from hand washing, visual projections and music from the production.

Clothesline Musings  | Art inspired by the Clothesline will run in tandem with the premiere of The Clothesline Muse, a multi-disciplinary theatrical production that explores the clothesline as a metaphor of our community lifeline and its ties to our environment. The exhibition will also take a closer look at the set and stories behind The Clothesline Muse– showcasing archival images, artifacts from hand washing, visual projections and music from the production.

Dog by Karen McDonnell & Anthony Cortosi perfectly encapsulates the theme of this groundbreaking, historic art show curated by Jody Schweitzer of Off the Wall Gallery @ Dirty Franks Bar on the corner of 13th & Pine Streets, bringing together artists from the dual art clubs, The Plastic Club & The Philadelphia Sketch Club on the historic Avenue of the Artists – a painting of a three-legged dog created in collaboration by an opposite sex couple.  The formally all female Plastic Club and the formally all male Philadelphia Sketch Club have been co-existing on the same block for decades – the Sketch Club is celebrating it’s 150th anniversary this year with a stunning array of historic art shows & the Plastic Club is nearly 100 – both clubs integrated sexes in 1991, since then Camac Street has become a fantastic haven for artists to work and learn side by side, the competition raising the bar for quality, prestige and creativity for everyone.  Alan Klawans, the exhibitions chair @ The Plastic Club, told DoN participation in art shows is up 300%; the current Small Oils Show @ PSC has 170 paintings, you couldn’t squeeze another piece in if you wanted to.

Karen & Anthony, create all of their art together: drawing, cutting, spraying, dumpster-diving, brain-storming…resulting in iconic imagery resonating with vibrant contemporary urban life.  Their work is proof men & women can work together in partnership, even if the result is like walking on three legs to get there.

The showcase @ Off the Wall Gallery with Dorothy Roschen, Cara Kendric and more, many of the artists are members of both clubs.

Mina Smith-Segal @ An Offering on Camac.  Mina won an award Saturday for a painting she created for the Lantern Theater Company‘s Henry IV, Part 1 production, another art collaboration between the Da Vinci Art Alliance of South Philly and the St. Steven’s Theater in Center City – it’s art synergy, baby!

Sibylle-Maria Pfaffenbichler is getting terrific buzz for her jazzy paintings of couples dancing; every show they’re in is instantly energized by the bold color and confidant brushwork, capturing the attention of the viewer like watching a really good-looking couple dancing deep in the groove of the music in a smokey dive with a great juke-box.

An Offering on Camac @ Dirty Franks is the perfect third leg for an art crawl; after trying to absorb over 300 fantastic new art works on view between the two clubs current shows, a stiff drink is in order.  What do you call a one-eyed, three-legged dog?  Lucky.

Shoshana and DoN attended “A Night of Art, Music & Film” @ Studio 34.  The yoga/healing studio/art space at 4522 Baltimore Ave hosted avant garde music, poetry, the premier of a film and an art exhibit, creating an exciting and interesting vibe in the mixed use space. 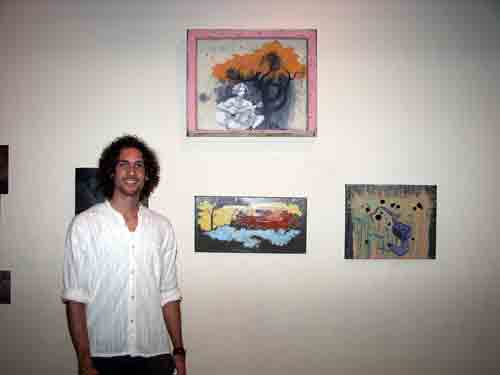 Artist, Stefan Kietzman with his paintings in the gallery at Studio 34 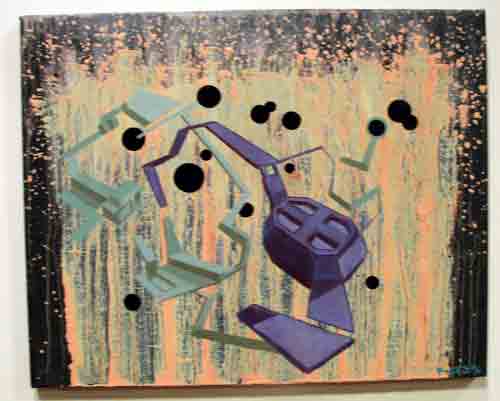 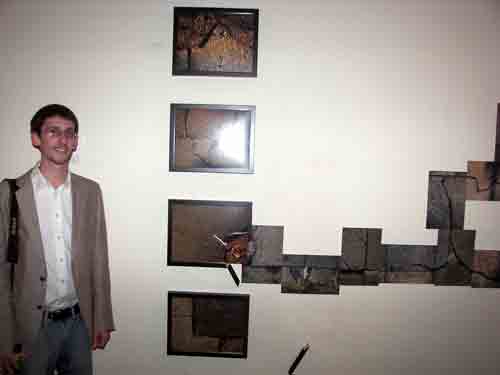 Photographer/Artist, Alan Massey with his photography installation at Studio 34 (sorry for the lens flare) but DoN wanted you to see the scope and scale of Massey’s  unique display. 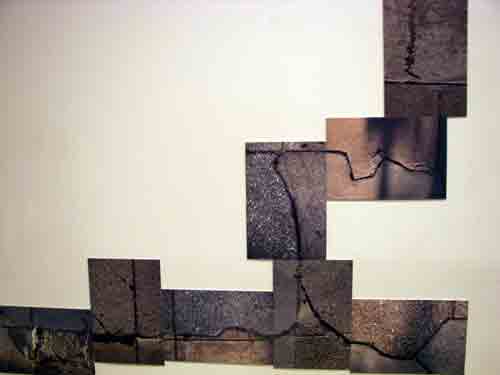 Detail of Alan Massey‘s photos of sidewalk cracks which seemed to spill out of a broken picture frame and squiggle across the wall.  Each photo is an image of an actual crack in city concrete, Massey can tell you exactly where each one is located. 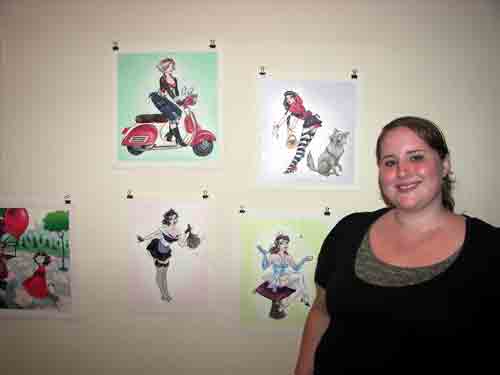 Artist, Maryann Held with her modern pin-up illustrations.  A graduate of UArts, Held says the school, “…pushed not just what was good but what makes me happy.”  Holla!  Held is planning a career in illustration and designing books for kids. 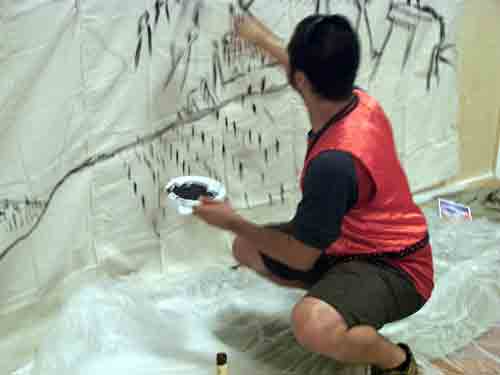 Djo Fortunado working on a background painting for his production of “Gods vs. Men” to be performed at The Rotunda in University City.  Fortunado wrote, directed, cast, designed costumes, created sets and even wrote music for what the artist calls a Reggae, Rock, HipHopera.  During the evening Djo also served as MC, introducing the eclectic mix of artists and performers.  Cool. 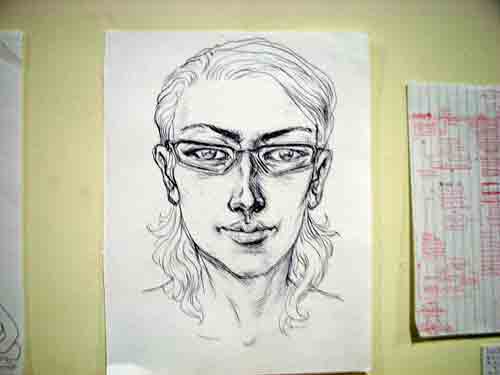 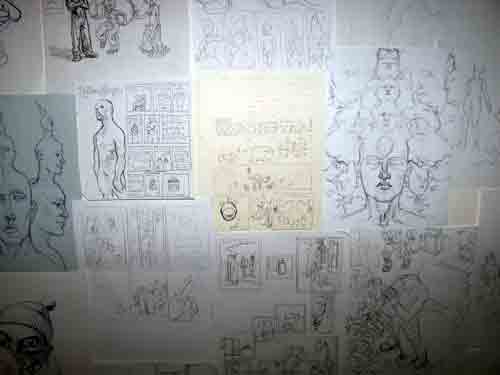 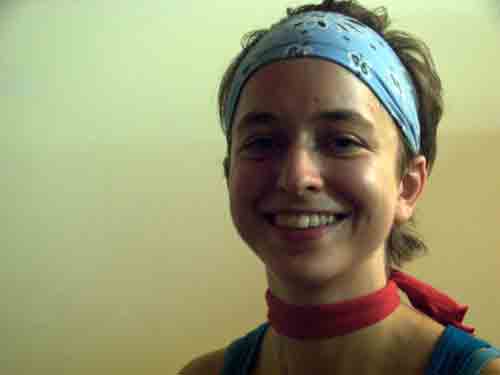 Cait Davis, starred, directed and produced “in This Place“, a movie she wrote and designed with a little help from her friends.  The abstract narrative follows Cait’s character through trials and tribulations of being young in the city – DoN found himself wishing she wouldn’t smoke so much in the movie.  The saturated colors and quirky angles captured by cinematographer Ray Flynn takes the viewer from The Green Line Coffee Shop (a very funny scene) to the bedroom to a dreamscape with precision and technique which truly resembled the qualities usually found in film not video.  “In This Place” will be entered in the Brooklyn Film Festival.

A unique aspect to the evening was that many of the artists are high school friends who all attended CAPA, the High School for Creative and Performing Arts (Cait and Alan have known each other since they were two) remaining close and collaborative.  So, friendship in the modern age isn’t just who has the longest friend list on FaceBook or being friended by strangers on MySpace, it’s actually showing up and supporting the people you love.  PAFA people support each other and so do members of Da Vinci Art Alliance, the Plastic Club and Philadelphia Sketch Club.  Being an artist is a competitive business, not for the thin-skinned or weak at heart, but with the appreciation of friends and family, producing art can be a rewarding intellectual experience.  Thanks to James Peniston for being such a gracious host and introducing DoN to all the artists.

Friday evening, June 27th, DoN and buddy Les attended the Willy Way Cabaret benefit for Transway featuring the Keith & Tom Show.  The William Way Center is Philadelphia’s gay community center with a library, archives, on-going art exhibits, workshops and support groups and is one of the few places trans-gendered people can be welcome and comfortable, allowing men who identify as women to engage in girl talk and women who identify as men to be out and proud. The show in the upstairs ballroom featured Tom Wilson Weinberg on the piano and singer Keith Kaczorowski performing original songs and cabaret standards by Sondheim, Kurt Weil and Leonard Cohen – the last song, “Hallelujah” played in DoN‘s head for several days after. The juried art show in the lobby is first rate and unabashed with beautiful paintings, photographs and mixed media works of the highest quality.