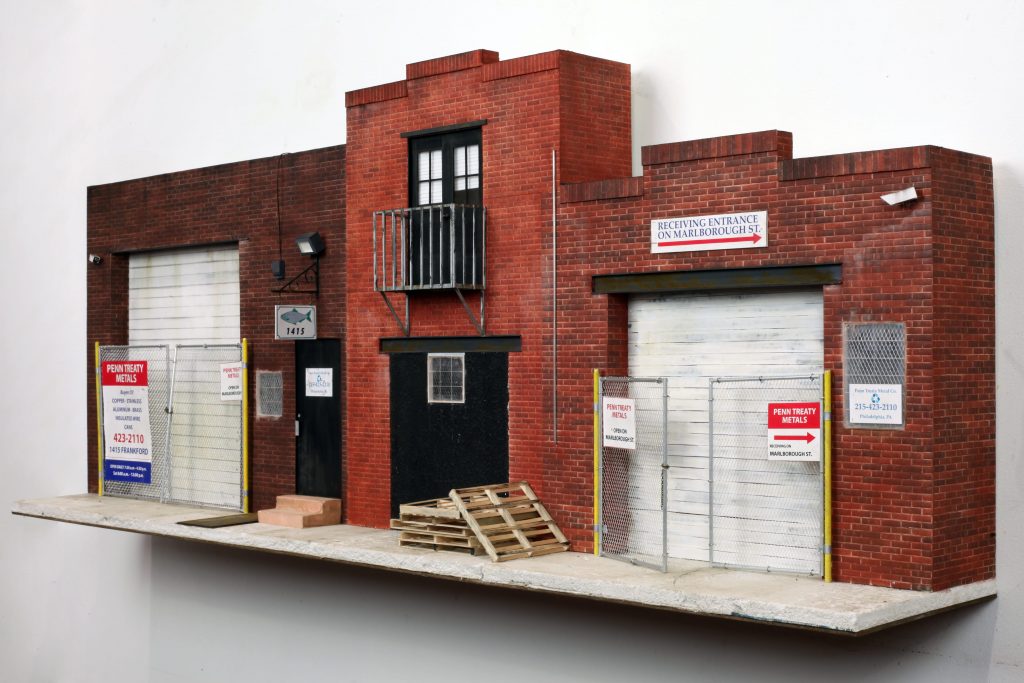 Paradigm Gallery is pleased to present Sacred Lands an exhibition of new sculptural works by the artist Drew Leshko opening March 23rd, 2018 and remaining on view through May 19th, 2018. The exhibition’s title is a reference to Leshko’s Philadelphia neighborhood of Fishtown and its ancestral roots as the home to the indigenous Lenni-Lenape. For more than a decade Leshko painstakingly documented the rapid re-development occurring in his hometown of Philadelphia specifically the historical neighborhood of Fishtown. Although Leshko’s works are sculptural by nature, he largely considers himself a documentarian, his sculptures echoing the work of legendary documentary photographers Gordon Parks and Bernd and Hilla Becher.

Leshko is particularly attracted to overlooked and oft-neglected sites, the unremarkable
buildings which will not be preserved. With past works, Leshko’s been drawn to the
once-thriving churches that have closed their doors as parishioners have been forced to
relocate, and the small local businesses with their classical designs which are now juxtaposed
with modern slapdash renovations, as well as the facades and machines of yesteryear. His
models splendidly isolate anachronistic architecture, encouraging the viewer to consider history
through a unique prism. 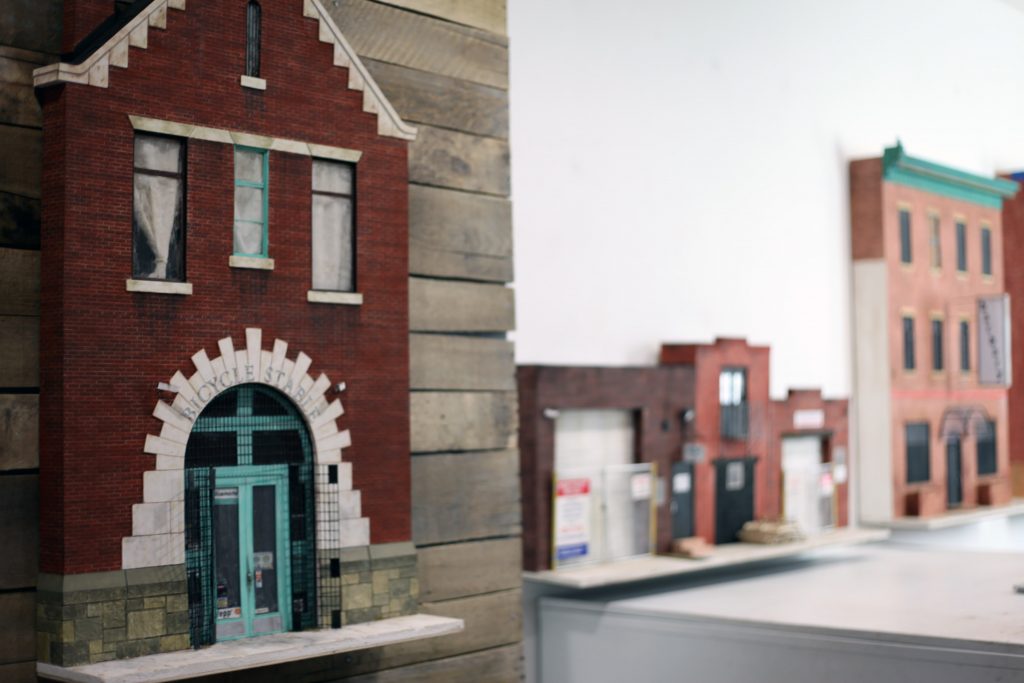 For Sacred Lands, Leshko replicates the Kensington Soup Society, a soup kitchen which
opened in 1844 and closed in 2008; Penn Treaty Metals, a metal recycling business spanning
three generations, the name of which references William Penn’s Treaty with the Native Lenape
in 1683; and the Edward Corner Marine Merchandise Warehouse, with its hand-painted signs
providing a physical reminder of Fishtown’s waterfront history. Leshko’s sculptures will be
complemented by his small-scale reproductions of local signage (for bars, restaurants, VFW
halls, and even strip clubs), as well as vintage photographs of historical buildings courtesy of the
Philadelphia City Archives. 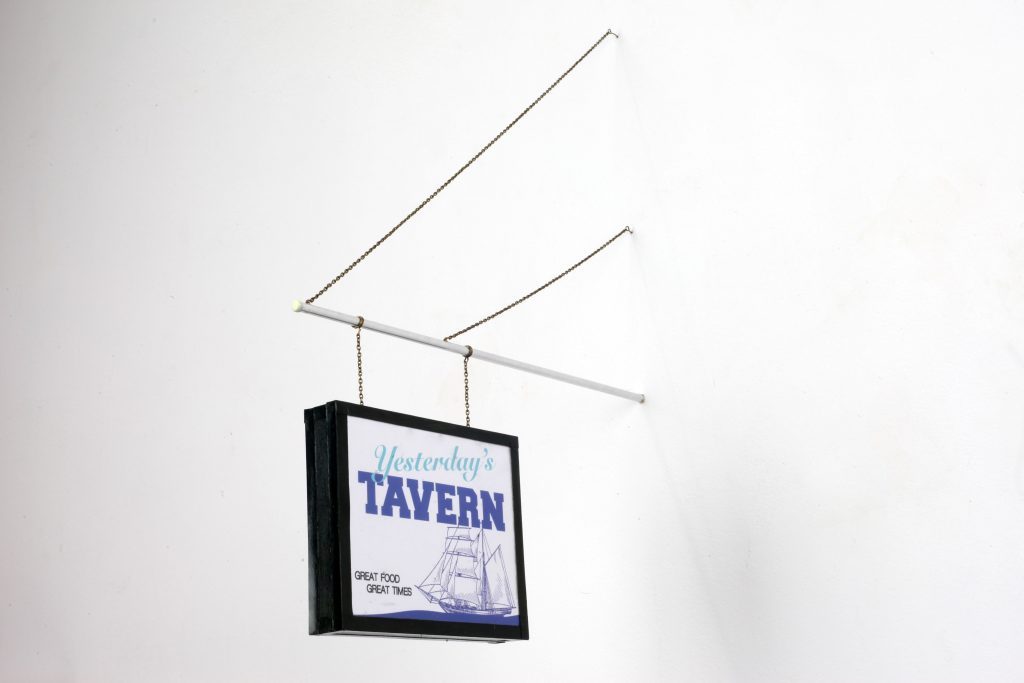 Leshko’s 1:12 dollhouse scale replicas are meticulously crafted, requiring 120 to 160 studio
hours to create. He begins each sculpture working from a single photograph as an image
reference, but then will discard the photograph in mid-process, relying on memory to complete
the piece. His miniatures act as singular physical documents of the buildings and businesses
which are sadly proving unsustainable. Leshko’s ongoing examination of gentrification and
historical preservation (or lack thereof), asks the timely question “in a soon-to-be-forgotten
America, what is worth preserving?”.

Drew Leshko is a Philadelphia, Pennsylvania-based artist. Working from observation and
photographs, the artist painstakingly recreates everything from building facades to campers at a scale which may be familiar to some viewers as standard dollhouse spec; the treatment to
Leshko’s work is widely different. The minute detail of his work includes city detritus such as
dumpsters and pallets, which are commentary of the ideas of what is worth preserving.
Accumulations of typically overlooked details and minutiae like acid rain deposits and rust
become beautiful adornments.

Leshko’s work has been exhibited in galleries, and museums both nationally and internationally.
His work is included in permanent collections including the Dean Collection (NYC), West
Collection (Philadelphia), Iron State Development’s corporate collection (Hoboken), Urban
Nation Museum (Berlin), and many private collections throughout the world.

Established February 2010, Paradigm Gallery + Studio started as a project between
co-founders and curators, Jason Chen and Sara McCorriston, to create a space to make
artwork, exhibit the work of their peers, and invite the members of the local community to make their own artwork in a welcoming gallery setting. Over the years, Paradigm Gallery + Studio has become a gallery of diverse contemporary artwork from around the world, while maintaining a focus on Philadelphia artists.